J. B. Manas is co-author of the bestselling sci-fi thriller, The Kronos Interference, which Kirkus Reviews called “impressively original” and a “tour de force.” The book was named to Kirkus’s Best of 2012 and given a starred review. Manas is a Philadelphia native whose world travels and passion for science, history, and the arts have led some to call him the consummate Renaissance Man. He’s an avid movie buff, a wine collector, a songwriter and guitarist, a technology geek, and an armchair philosopher——all of which make their way into his writing at one time or another. He is a member of the Authors Guild, the Association for Former Intelligence Officers, and International Thriller Writers (ITW) and is currently working on a Hitchcockian suspense thriller, as well as a sequel to The Kronos Interference.

In addition to his work in the world of fiction, Manas also writes non-fiction books on organizational leadership as Jerry Manas, His bestselling works have received critical acclaim for being extensively researched, yet entertaining and accessible. His work has been highlighted in in a variety of publications, including The National Post, The Globe and Mail, The Chicago Sun Times, and The Houston Chronicle. He has also appeared on radio programs nationwide and on National TV in Iceland, applying his lessons to the country’s economic recovery. 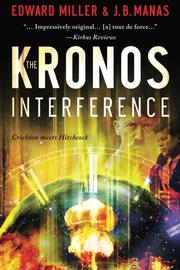 In this time-travel thriller, debut authors Miller and Manas spin a clever, original variation on a classic alternative history premise: What if it were possible to travel back in time and kill Adolf Hitler?

Jacob Newman, a brilliant scientist and nanotechnology expert who consults with the CIA on projects of national security, receives a mysterious packet containing his German grandfather’s diaries from the 1920s, which detail a failed plot to poison Hitler at the beginning of his ascent to power. Although Newman’s wife is dying of cancer, a global crisis soon takes him from her bedside. An alien vessel has been found on the bottom of the ocean, off the coast of Chile. Inside the elegantly described “cavernous zeppelin shaped” space are eight giant floating monitors—arranged “like some sort of avant-garde Stonehenge”—that show images from horrific moments in human history, including the Crusades and the Holocaust. The ship also contains some strange pieces of alien technology; most notably, a small object the scientists dub the Kronos Device, which, as Newman discovers, facilitates time travel. The scientists soon come to the consensus that someone or something has been sitting in judgment of humankind—and an ominous verdict could be delivered at any time. Inspired by his grandfather’s diary and desperate to afford humankind another chance in the eyes of the mysterious alien power, Newman decides to go back in time and ensure that the plot to kill Hitler is successful, thereby—in theory—erasing the ensuing heinous acts from history. Sci-fi fans will be familiar with what happens next: By interfering with the past, Newman inadvertently creates a future that is far worse. But here the novel displays some unexpectedly creative plotting: Newman’s attempt to undo the damage he’s done involves him in his own mind-bending parallel life, as well as the prospect of a harrowing sacrifice. The prose is unfussy, the pacing appropriately brisk, and the past and future sequences show the authors’ admirable imaginative gifts. Miller and Manas’ tour de force packs plenty of entertainment value, and the ending tantalizes with the possibility of future past installments.