J. B. Michaels, a member of the Society of Children’s Book Writers and Illustrators, has written stories since he was in fourth grade. He is a history teacher and department chair who loves his job.

Married and with a son, Michaels has a great love of family. He has two sequels recounting the further adventures of the Tannenbaum Tailors ready for publication. The Order of St. Michael: A Bud Hutchins Thriller is JB's first Young Adult book with a sequel, The Elixir of the Ancients, to launch summer 2017. 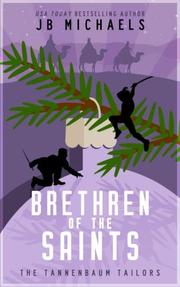 THE TANNENBAUM TAILORS AND THE BRETHREN OF THE SAINTS

In the last book of the series, the Tannenbaum Tailors, a group of elves who tend and “tailor,” or decorate, trees, successfully saved Christmas in 1987 by stopping the Spiritless elves from stealing the Snowball—Santa’s device for delivering gifts. In this book, they must still contend with the Spiritless, who slip tree-destroying swarmer termites into a toy and also try to abduct the Tailors and their captain, Brendan Holly. With help from a fairy named Jane, the Tailors once again thwart the Spiritless, but as the next Christmas draws near, they become wary. A Spiritless elf that the Tailors call “Number One” has been missing for a year, and it also appears that the Spiritless have their own version of a GlimmerBeam, a device that sends presents directly to Santa’s bag. At the same time, Brendan faces a court martial for violating an oath; he revealed himself and the history of the North Pole to a young human, Jack, because he needed the boy’s help. Jane and fellow fairy Coco’s reconnaissance mission to the Spiritless’ South Pole headquarters takes an unexpected turn when they find out that Santa is being held captive there. To make matters worse, there may be a traitor among the good elves. Michaels’ second book to feature the Tailors is a quick, delightful read, with short chapters that effectively bounce the story from scene to scene. The Christian symbolism is perhaps too conspicuous; for example, the Spiritless are elves who rebelled against Santa and then went to the South Pole. But a sense of humor is still prevalent throughout; one highlight is when Tailor Steve and a Spiritless elf vie for Jack’s attention—one at each of his ears, much as if an angel and a devil were on his shoulders. The action is intense throughout, including physical altercations and explosions, but young readers will have no sympathy for the defeated Spiritless. The book even includes a possible origin for Santa, although the background on the dark elves’ potential leader is more striking.

The Brethren of the Saints-Book Launch Trailer

Marley was dead: to begin with.

THE TANNENBAUM TAILORS AND THE BRETHREN OF THE SAINTS: Readers' Favorite Bronze Medal 2017- Children's Action, 2017

The Tannenbaum Tailors and the Secret Snowball

They are the Tannenbaum Tailors: elves charged with maintaining Christmas trees in homes around the world. Without the Tailors’ efforts, families might lose their Christmas spirit. And this year, one team of Tailors will be tested like never before. With the North Pole itself under attack, newly promoted Captain Brendan is assigned a special mission: conceal the source of Santa’s power within a Christmas tree in Chicago. On Christmas Eve, Santa will pick it up. The job would be simple, but the Tailors find themselves facing a serious threat”"the thieving Spiritless elves, already responsible for sabotaging the North Pole Home Tree, will do anything to gain control of the very thing that makes Christmas possible. ??? Equally bad, Christmas spirit is at an all-time low in the Chicago home where Brendan’s assigned. The family’s mother even wants to take the tree down before Christmas Eve! To save Christmas, Captain Brendan and his Tailors will have to use every spirit-raising trick they know”"and possibly even bend a few rules to pull it off. ??? Combining holiday cheer with action and thrills, The Tannenbaum Tailors and the Secret Snowball reads like Raiders of the Lost Ark in a Christmas tree.
Published: Nov. 16, 2015
ISBN: 0692540555