Jean Juba has worked in twenty different countries for organizations that include the US Department of State Foreign Service, NGOs, and the UN Department of Peacekeeping Operations.

With the publication of her debut memoir, Travels Unveiled, Juba continues traveling through extreme experiences while writing her second nonfiction book. 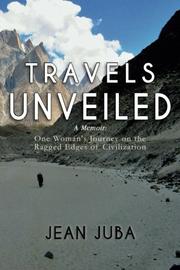 A personal memoir that travels decades, cultures, and many miles.

This is a man’s world, and no one knows it better that Juba, whose memoir—her first book—opens in 1999 in the unlikely setting of rural Pakistan. While staying in a hotel there, she responded to a request from her guide that she—as an American, who therefore must be smart—fix a satellite dish for some other guests. She replied willingly, only to find that the guests in question were Taliban; there was no room for mistakes, electrical or otherwise, particularly with her being an employee of the U.S. Embassy in Islamabad. In an extended flashback beginning with the next chapter, she details how she came to find herself in such a precarious situation. As a directionless youngster, she was an Affirmative Action recruit for a construction road crew and thus became one of the few women working in a male-dominated field. The challenges were real, from being denied opportunities for promotion and advancement to sexual harassment. Juba learned that her greatest chance for success lay in being observant and more or less invisible, to play by the rules, not make waves, but to learn everything she could about “the games men play”—the coded ways they interact with each other and with women. The knowledge she gained served her well in her second career with the U.S. diplomatic corps in the Foreign Service. Initially stationed in Islamabad, she interacted on a daily basis with conservative Muslims whose attitudes about women’s roles outside the home were profoundly different than those in America yet in some ways distressingly similar. In Pakistan, Juba had to navigate her otherness not only as a woman, but also as an American, walking a fine line between respecting cultural sensitivities and “leaning in” as a professional woman. Her stories about how she handled her interactions with the locals—almost all men, since Pakistani women have limited professional opportunities—are genuine, often funny, and sometimes frightening, as with the Taliban story. The stories also comprise an appealing travelogue as Juba, her colleagues, and their handlers traverse the enormous, diverse country seldom seen by Westerners. One flaw—possibly unavoidable due to professional restraint—is that apart from a harrowing chapter about the aftermath of the 1998 U.S. Embassy bombing in Nairobi, which Juba was sent to help oversee, readers learn little about what Juba’s job actually entailed.

One woman’s deft, thoughtful account of Muslim-American and male-female relationships.