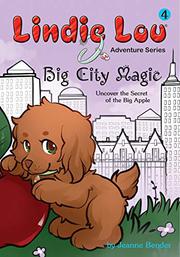 Little Lindie Lou, a spirited brown pup with huge paws and floppy ears, has, in previous series installments, experienced early life in Missouri, found a new home in Seattle, and visited a farm in Iowa. As this lively, travel-themed chapter book series continues, Lindie Lou jets into New York with her loving owners, Kate and Bryan, to stay with their friends at a posh apartment house overlooking Central Park. Lindie Lou and the hosts’ puppy are allowed to explore the idealized city alone because they have tracking collars, and Bender infuses the plot with benign suspense as Lindie Lou searches for a legendary apple tree that, their host says, gave New York it nickname of “The Big Apple.” The pup’s ability to read comes in handy as she tracks down the tree; so does her surprise ability to speak with a mysterious woman (whose eyes, strangely, are the same bright green as Lindie’s) and an elderly man named Kris, who explains the legendary tree’s secret and makes a significant appearance in the Macy’s Thanksgiving Day Parade. The sunny, character-building revelation may disappoint children hoping for magic—and may strike adults as exceedingly aspirational—but Kris and the green-eyed woman retain an air of mystery. Bender’s text, in which occasional words are enlarged, colored, or reshaped for emphasis, will attract young eyes, and Willows again charms with watercolor-soft digital illustrations that combine realism and a cartoonish style. The humans are diverse; Bryan and Kate are white, their friends are people of color, and the few other human characters have varying skin tones. As in previous books, Bender describes various landmarks; here, they include One World Trade Center, the Oculus transportation hub, the Statue of Liberty, and others. Post-story features include a Lindie Lou–related song, New York City “Fun Facts,” a calendar of events, and a “Quick Quiz” for reading comprehension.

A tale with an adorable, relatable central character, a hint of mystery, and a wholesome message.

A puppy takes an airplane trip to meet her new family in this first installment of a children’s series.

With her soft brown fur, floppy ears, and big paws, Lindie Lou is an adorable puppy, one of five in a litter. All are well taken care of in St. Louis by their Caucasian caretakers, Joe and Sherry, who set up a cozy Puppy Playground for them in the (unused) garage with blankets, toys, and a large doggy bed. Playtime, naps, and a few escapades keep Lindie Lou busy, such as a puppy play date at the City Museum with children from a homeless shelter who aren’t allowed to have pets. At 8 weeks old, the puppies are eligible for adoption and Joe and Sherry would love to keep Lindie Lou. But she’s been promised to Sherry’s sister, Kate, and “a promise is a promise.” Finally, it’s time for Lindie Lou’s biggest adventure yet, a flight to “Emerald City” (Seattle). A fellow canine traveler helps explain the scary parts, reassuring Lindie Lou, telling her all about her new home, and getting her excited about flying in an airplane: “I’ve been on many amazing journeys and you will too. This is only the beginning.” Additional material in the book, aimed at kids ages 4 to 8, includes a quiz, fun facts, and a St. Louis calendar of events. Bender (Harvest Time, 2018, etc.) appeals to young canine lovers by bringing them into Lindie Lou’s point of view. The writing can be bland, but in describing the puppy’s wide-eyed encounters with new places, the volume deftly shows how her anxieties often parallel those of children experiencing the unfamiliar. Lindie Lou learns to overcome her fears through a series of steps that kids, too, can follow: “Stop, look around, and listen. Think about what you can do. Do something if you need to. If nothing can be done, stay calm and think of something good.” The images by debut illustrator Willows are bright and cartoonlike in depicting animals, but helpfully realistic in showing such unfamiliar details as the airport’s luggage carousel.

A reassuring tale for young travelers, with a special appeal for dog lovers. 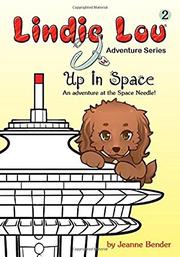 The adventures of a sunny-natured pup continue as she adjusts to her new home in Seattle in the second installment of a travel-centered chapter-book series.

The first book in this series by Bender (Lindie Lou, Adventure Series: Flying High, 2016) took a spirited little dog named Lindie Lou through the first months of her puppyhood with her family in Missouri. It concluded with a plane trip that ends where this book begins: Seattle. There, Lindie Lou meets her new human family and sees some Seattle sights, including Pike Place Market, where Lindie Lou reunites with Max, the old dog who reassured her during their flight to Washington, and the Space Needle, where a frightened Lindie Lou inadvertently causes chaos in a gift store. As before, the pup’s lessons learned and emotions speak to her target audience: young readers whose increasing exposure to the wider world can be both intimidating and exciting. The little dog learns lessons about caution and earning trust, and when she feels overwhelmed, she has the comfort of her favorite toy and the arms of human parent Kate. (This effort to be relatable sometimes comes at the expense of responsible canine caretaking; e.g., Kate lets Lindie Lou trot off with Max at the open-air market and allows random children in a park to grab at and play with her.) Willows’ (Lindie Lou, Adventure Series: Flying High, 2016) cartoon-style illustrations, which share space with the well-spaced text, offer bright colors, clarity, and an endearing, cuddly puppy with big paws and fluffy ears. Different lettering styles add reading fun by giving visual emphasis to certain words. The story’s ending sets up Lindie Lou’s next adventure—a trip to an organic farm. In keeping with the series’ travel theme, the author again includes a quiz, fun facts, things to do and places to go in Seattle, and internet resources. (A couple of grammatical fixes are needed.)

A gentle blend of storytelling, travelogue, and reassurance and reinforcement for children beginning to explore the world.