Jeff Grode grew up in Erie, Pennsylvania, currently resides on Maryland’s Eastern Shore, and knows his way around a kayak, horses, and a good story. A lifelong fan of science fiction, fantasy, and spy novels, he has found a love for creative writing. Science fiction is the backdrop for his stories, and he focuses upon the interaction and inherent conflict between friends, family, and foes in a world undergoing fast technological change. 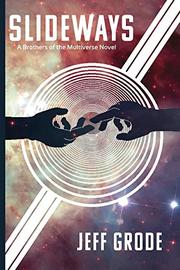 In Grode’s sci-fi debut, a teenage boy becomes involved in a battle for the fate of the universe.

It’s been two years since Jack Fuller was killed in a tragic accident, leaving his family broken with grief. Although his younger brother, Ben, does his best to persevere, involving himself in sports and leaning on close friends, he can’t escape the feeling that he should have been the one to die. Everything changes when his grandfather Patrick McDugan, a researcher for the U.S. Department of Defense, invents a device that can open doors to parallel dimensions. When Ben accidentally goes through a portal with his grandfather, his first contact is with a world named Terra; in its version of the United States, called the United American Commonwealth, environmentalism is paramount, but the citizens are closely monitored by the government. Doppelgängers exist of almost everyone Ben knows, although in some cases, their relationships and even their personalities dramatically differ. When Terran officials capture his grandfather, Ben is tasked with keeping his technology out of the hands of a ruthless and formidable government agency. Grode’s writing is densely saturated with detail, taking plenty of time to explore his rich concept. The nature of technology and its capacity to shape society for better or worse is a recurring theme; for instance, Ben’s grandfather solemnly speculates that sharing his portal device with the world would bring about “Revolutionary change and…chaos.” On a more playful note, the narrative introduces several ethical questions as characters meet doppelgängers of their friends, family members, and romantic interests. Although the story centers primarily on Ben, the close third-person perspective frequently shifts to other characters, including his parents and grandfather. The result is a spectrum of different outlooks regarding relationships, including high school romance as well as Patrick’s quest to reunite with the love of his life. Early on, the pacing is slow, but the tension eventually amps up to action-thriller levels. The story finishes with a satisfying resolution, laying the groundwork for future adventures.

An eventful and immersive interdimensional romp.

The Name of the Wind

A teenager, his grandfather, and a resurrected robot, slip the bonds of time to save the world. Sixteen-year-old Ben’s confidence and family life have never been better since meeting Jack, his doppel-brother from Terra, a planet in a parallel universe. Ben’s grandfather, Patrick, races the clock to stop an enemy drone from opening a portal between Earth and Erde. During his quest, he rebuilds a damaged robot and unlocks the mystery of time travel. The stakes have never been higher as secrets turn past friends into foes, and brothers into allies. Ben borrows Patrick’s time-medallion, attempts to help Jack with a personal crisis on Terra, and is shocked by what he finds. Ben accepts help from the robot, Amorphous, and dares to change the past once more. Despite the risk of unintended consequences, Ben rides the twisting timelines to save his friends, family, and the future of his world.
Published: Aug. 15, 2018
ISBN: 13: 978-1718609440