Jeff Koob was born in Tokyo in 1948 and raised as an Army brat, living in SC, KS, GA, VA and CA before living in Vienna, Austria from1958-62. He attended high school in Columbus, GA. He graduated from The Citadel (Military College of SC) in 1970, with a BA in English and an Army commission. After four years as a lieutenant - three of them in Germany - he attended West GA College (now University of W. GA) and earned a Masters in psychology. He worked as a public sector psychologist for over thirty years, mostly at community mental health centers in AL and SC, but also at juvenile and adult prisons, and running a housing program for homeless mentally ill people in Columbia, SC. He has worked in a treatment program for juvenile sex offenders and in a Dialectical Behavior Therapy (DBT) treatment program, for persons diagnosed with Borderline Personality Disorder.

With his wife, Maria Madeo, he served as a Peace Corps Volunteer in Jamaica (1991-3), assigned as the ward psychologist on the detox/rehab ward of the University Hospital of the West Indies. He also served as a Red Cross Disaster Mental Health Volunteer at Ground Zero in Manhattan, after the attacks on the World Trade Center. His last position before retiring in 2013 was as a ward psychologist on a locked ward at SC's largest psychiatric hospital. He continues to advocate for the rights of the mentally ill.

Koob has written two books: TWO YEARS IN KINGSTON TOWN - A PEACE CORPS MEMOIR (iUniverse, 2002)) and AD NAUSEAM: HOW ADVERTISING AND PUBLIC RELATIONS CHANGED EVERYTHING (iUniverse, 2015). He has a number of other works in various stages of gestation. 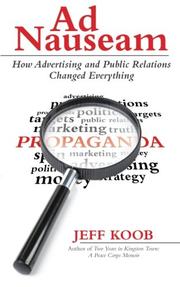 In this brief but smoldering tract, a psychologist deconstructs contemporary advertising as psychologically perverse, endlessly manipulative, deceitful, and ubiquitous.

Koob (Two Years in Kingston Town, 2002) succinctly describes how advertising and its equally out-of-control cohort, public relations, strive to mold behavior. He tells of how they use techniques of propaganda—and in fact become propaganda—in order to sell products, points of view, political candidates, and anything else, up to and including war. “As a psychologist, it disturbs me greatly to see that our society’s primary, systematic application of the principles of psychology has been as a tool for commercial and political persuasion and for the manipulation of behavior in the service of commerce,” he writes. He delineates these techniques of persuasion and shows, in a somewhat limited way, how they’re applied in ads that play on feelings of love, fear, anger, and other emotions that advertisers think will trigger purchases. Some readers may suspect early on that this heartfelt argument belabors the obvious. In truth, few people could fail to perceive how advertisers, with their psychology-driven bag of tricks, are encroaching ever further into common spaces, including the Internet. But Koob’s competently written, highly readable primer on how the culture came to this awful point would certainly be instructive to a younger audience that is growing up in a time when the $130 billion advertising industry is running at full tilt and slick ads are promoted as entertainment. Who could gainsay his recommendation that every student be taught how to recognize and resist this ceaseless assault? His plea for enforcement of “a strict truth-in-advertising law with teeth” appears equally worthy. Yet neither seems likely to happen, and mass manipulation through advertising in the interest of earning profits doesn’t appear on most lists of common public concerns. One is left to hit the mute button, avert one’s eyes, and swat away ads as one would mosquitoes. Quite clearly, Koob doesn’t believe that’s nearly enough.

An illumination and critique of a commercial culture that distorts reality for gain.

A psychologist and a psychiatric nurse spend two years in Kingston, Jamaica. This book is not only about the places they went and the people they met, but is full of information about Jamaican culture, and contains vivid descriptions of cross-cultural therapy.
ISBN: 0-595-21449-5