Rabbi Jeffrey Gale was born in St. Louis, Missouri. Upon graduation from University City High School, he attended Miami University in Oxford, Ohio. He majored in political science and spent his junior year at the European Study Centre in Luxembourg. Upon graduating cum laude in 1975, he moved to London, England. In 1980, he was ordained at Leo Baeck College. After ordination, Rabbi Gale served the Southend and District Reform Synagogue and the Settlement Synagogue. While in England, he served on the reform movement's music committee and on the Soviet Jewry committee. His visits to the former Soviet Union in the early 1980s to visit refuseniks were highlights of his rabbinate in London. In Winnipeg, Rabbi Gale was a member of the chaplaincy committee of Jewish Child and Family Services, the Winnipeg Jewish Federation's outreach committee for special needs congregants, the Winnipeg Council of Rabbis, of which he was president for two years, and the Winnipeg Jewish Community Council. In Wantagh, Rabbi Gale was an active member of the Wantagh Clergy Council and served as its president for four years. He was honored in 1999 by the Nassau County Legislature for his work on interfaith relations throughout this area and Canada. He was also honored by the Council for American Islamic Relations. Rabbi Gale is married to Dr. Tsiporah Shore, the associate director of the Bone Marrow Transplant Unit at New York Presbyterian Hospital, and has two adult children, Leanne and Joshua. Leanne is a summa cum laude graduate of the University of Pennsylvania and currently works for the National Council of Jewish Women. Joshua currently attends Emory University. "The Ballad of East and West" leaves many unanswered questions. Many of my readers were curious as to what happened to many of the characters, particularly the refuseniks. The sequel, "The Secret of Redemption", which is set thirty years later will provide the answers that they crave. Also, when I completed the book, I came to realize that "The Ballad of East and West" is not confined to the Cold War. It also plays out in other areas of the world: East and West Jerusalem as well as East and West of Broadway in New York. In addition, the sequel will also reflect upon the biblical exodus from Egypt, the Holocaust, and the plight of Soviet Jewry and how it impacts upon interfaith and interracial attitudes, both in America and Israel.

“A sometimes-engaging polemical story rooted in the realities of authoritarianism and activism.”
– Kirkus Reviews 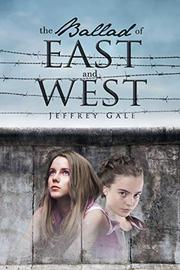 The Ballad of East and West

In Gale’s debut novel, an American-British rabbi works to support refuseniks in the 1980s.

Even in its later decades, the Soviet Union was an extremely oppressive place for Jews to live. They were subjected to constant casual prejudice and systemic discrimination in employment and education and were forbidden to learn Hebrew or engage in any religious practices. Still, many engaged in those practices clandestinely and requested exit visas so they could immigrate to Israel or the West. Some families were permitted to leave, but most were refused. These refuseniks, as they came to be known, were not only denied the freedom to leave the country, but were often fired from their jobs, violently harassed, and even imprisoned. As Jewish communities in North America and Western Europe became conscious of the plight of their coreligionists, they began organizing to support them. Gale’s novel is essentially a vehicle to relate this specific history. In the early 1980s, Gale’s protagonist, Rabbi Levin—like Gale, an American-born Reform rabbi—is the leader of a congregation in the East End of London. Many members of the synagogue and broader community are active in working to support the refuseniks. Strategies range from “twinning” British Hebrew School students with Soviet peers so that the latter could be bar- or bat mitzvahed in absentia to writing letters to actually visiting the USSR to show support and deliver Jewish texts and ritual objects. Despite his hesitations, Levin feels called to join a mission to the Soviet Union—an experience which brings him and his congregants closer to their Soviet counterparts. The parts of the book about Levin’s own life are monotonous; readers do not need to know so much about the logistics of the character’s High Holiday services, for example. There is also little distinction between Levin’s personal dialogue and his sermons. On the other hand, the sections drawn from the real-life experiences of the refuseniks are nuanced, historically accurate, and often fascinating. Through Levin’s observations, readers will gain insight into the realities of religious persecution and the complexities of providing aid.

A sometimes-engaging polemical story rooted in the realities of authoritarianism and activism.

Whether I shall turn out to be the hero of my own life, or whether that station will be held by anybody else, these pages must show."