I had intended to retire from teaching high school English in 2010 when my youngest child graduated from the University of Missouri. I weighed 460 pounds and my knees ached so much from bearing the onerous cargo that I could not walk more than several hundred steps a day. That I was still teaching was itself a miracle. I had suffered depression through much of the nineties and genuinely pondered whether my life was worth living.

The irony was that I married way out of my league to a beautiful woman who cares deeply for me. Together we had three wonderful children who grew into phenomenal young adults: my son works with autistic children, a daughter (a former Blackhawk helicopter pilot with the 82nd Airborne) who is the mother of four children, and a daughter who works in human resources.

More Than One Way Home is about how I recovered from chronic depression, lost more than two hundred pounds, and redeemed my teaching career, and, more importantly, my life. I am the 2014 Kansas Teacher of the Year, and in 2018 was inducted into the National Teachers Hall of Fame.

“The author points out that "humanity resides in the minute details," and it is just such specifics that fill the pages without overburdening them. - Kirkus Review”
– Kirkus Reviews 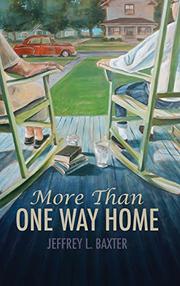 MORE THAN ONE WAY HOME

A memoir chronicles a teacher’s youth in the Midwest and his struggles as an adult.

Debut author Baxter was born in 1948 in Kansas. His childhood was a happy one, thanks in no small part to his grandmother Younkin. Grandma was a retired English teacher with a fondness for literature, rocking chairs, and canasta. The book encompasses a number of vignettes from the author’s younger days, including the time in 1956 that his father caught him stealing hubcaps from car tires and how in 1965 he participated in a prank involving potassium from a chemistry class. He met his wife as a freshman at the University of Kansas. He eventually decided to follow in the footsteps of his grandmother and became a high school English teacher. The career path was not always easy. The author learned the hard way that his own love of books would not carry over to his students through “osmosis.” Recollections from the author’s adult years become more fraught. He writes of how, in retrospect, he always felt a separation from his mother, asserting: “I know I was loved, but it was from a distance.” He became overweight. At one of his children’s soccer games, a man in a NASCAR hat called him “fatty.” He explained to his therapist that he had the feeling of a kind of black hole overtaking him. And then there was the death of his first son, Jordan, in infancy. The author explains how “the memory of Jordan’s short life still fills my eyes with a juxtaposition of smiles and tears.” It is just such a juxtaposition that is at the heart of this slender volume (under 100 pages). The book consists of chapters that are rarely more than a few pages long. Readers get an inkling of some of Baxter’s worst and best times without too much lingering on either category. The outcome is certainly a breezy read, though some points could have used greater elaboration. For instance, the author mentions being a teacher in 1999 at the time of the Columbine High School shootings. Although the senselessness of the event disturbed him in obvious ways, it would have been informative to learn more. What was the discussion like in his workplace? What did he tell his students? Were his fellow teachers worried? Nevertheless, the memoir’s brevity is also a wonderful asset. No words are wasted on complicated family origin stories, minor triumphs that do not translate well on the page (for example, a promotion at work), or other miscellaneous events that would be of limited interest to readers. The audience is instead given choice segments of Baxter’s very personal experiences. The author points out that “humanity resides in minute details,” and it is just such specifics that fill the pages without overburdening them.

A short account that paints a thorough and vivid portrait of one man’s American life.

to prepare high school students for a successful life