Jennae Vale is a best selling author of romance with a touch of magic. As a history buff from an early age, Jennae often found herself day-dreaming in history class - wondering what it would be like to live in the places and time periods she was learning about. Writing time travel romance has given her an opportunity to take those daydreams and turn them into stories to share with readers everywhere.
Originally from the Boston area, Jennae now lives in the San Francisco Bay area, where some of her characters also reside. When Jennae isn’t writing, she enjoys spending time with her family and her pets, and daydreaming, of course.

“A fast-paced and engaging historical and romantic fantasy with strong protagonists.”
– Kirkus Reviews 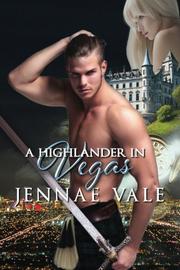 A HIGHLANDER IN VEGAS

In February 1692, the hospitality of Braeden MacDonald’s clan, the MacDonalds of Glencoe, is betrayed by a man named Robert Campbell. Braeden’s grandmother hands him a pocket watch and tells him to think of his mother and wish to travel to the meadows. After wishing on the watch, Braeden finds himself in an unfamiliar place. He is greeted by Tessa McTavish, who believes he is interviewing for a security job at her family’s Albannach Resort Hotel and Casino. She takes him to her father, John, who tells him he is in Las Vegas in the year 2016. John knows about the watch and offers to help him in exchange for protecting Tessa. John doesn’t trust Tessa’s fiance, Danny Madden. Despite her misgivings, Tessa is attracted to the ruggedly handsome Braeden and the feeling is mutual. It soon becomes apparent that John’s concerns are justified. When Danny mysteriously dies after breaking off the engagement and an employee disappears after witnessing a theft, Tessa and Braeden begin to suspect the connection is the ancestor of an enemy from Braeden’s past. Vale’s (A Turn in Time, 2015, etc.) latest novel is an enjoyable romantic fantasy highlighted by likable protagonists and clever flourishes of magic and historical detail. The brief but effective opening chapter sets the stage for the Glencoe Massacre and Braeden’s grandmother’s urgent effort to save him by giving him the watch. The contrast between Braeden’s 17th-century Scotland and Tessa’s 21st-century Las Vegas is striking, and Vale captures the humor in the highlander’s attempts to navigate his new surroundings, from riding in an elevator to dining in a fine restaurant. Tessa is a strong and resourceful romantic foil for Braeden. Their relationship unfolds gradually as she struggles with a fiance whose intentions seem insincere. The leads are bolstered by a strong supporting cast of characters, including Niall Campbell, a charismatic magician who seems to know a lot about Braeden’s clan and the watch.

A fast-paced and engaging historical and romantic fantasy with strong protagonists.

A Bridge Through Time - Book One of The Thistle & Hive Series

Ashley Moore's life in San Francisco has hit a few snags, not the least of which involves sightings of a mystery man around every corner. Is she losing her mind or does he really exist? Her search for this grey-eyed stranger leads her to Scotland. There she meets a witch with a secret, a vindictive English knight who is bent on revenge, and she crosses a fog shrouded bridge into the arms of a 16th century Highlander. Cailin MacBayne is no stranger to beautiful women, but has always managed to stay one step ahead of commitment. That all comes to an end when he meets Ashley. He doesn't care where this beautiful, yet unusual lass came from, he's just happy to have found her. Ashley cannot resist the handsome Scot and finds herself falling hopelessly in love. In the process, a secret is revealed, a battle is waged and Ashley must ultimately decide whether to return to her own time or give up her 21st century life to stay with the love she has found in the past.
Published: Oct. 20, 2014
ISBN: 978-0-9907070-0-4

A Matter of Time - Book Four of The Thistle & Hive Series

Sir Richard Jefford has a reputation and it’s a bad one. The witch Edna Campbell seems to think he can change for the better, because she’s giving Richard a chance to redeem himself in present day San Francisco. Confused as to why he’s there and what he’s to learn, Richard wonders how he can possibly be successful. Will he get his chance at a new life, or will circumstances deny him what he truly desires and cause him to return to his old ways? Angelina Lawson thinks she has it all figured out when it comes to love. She is a beautiful woman who could have any man she wants, but Angelina doesn’t trust any of them enough to ever be in love. Protecting her heart is first and foremost in her life, that is, until she meets a man so unexpectedly different, he could possibly change her mind and claim the heart she so fiercely guards. Battling their pasts, as well as each other, Richard and Angelina find themselves running for their lives back to sixteenth century Scotland, while being pursued by Malcolm Granger, a man who would do anything to go back in time to recover a lost treasure.

It's Christmas at The Thistle & Hive Inn and Edna Campbell couldn't be happier. She's sent all of her time travelling friends and their families a special invitation to meet at the bridge on December 22, where they'll be transported through time from the year 1516 to present day Glendaloch, Scotland. It should be a joyful celebration, but things may not go exactly as planned when sixteenth century highlanders and their twenty-first century wives invade this small village. ?

A Thistle Beyond Time - Book Two of The Thistle & Hive Series

Cormac MacBayne wants a wife and the witch, Edna Campbell, has the perfect woman in mind. The only problem is they’re separated by five hundred years and thousands of miles. Fresh from a bad marriage, Jenna Sinclair has sworn off men – that is until a handsome Highlander comes out of the fog and into her life. He’s a mystery and possibly part of an elaborate practical joke concocted by her cousin. Jenna’s had enough deception in her life. Can she risk everything to be with a man who is so obviously lying to her?

A Turn In Time - Book 5 of The Thistle & Hive Series

Summoned by his father to return home immediately, Dougall MacRae knows he cannot leave without his beloved Helene. He asks her to marry him and accompany him back to Castle Treun unaware that his father has plans for him to wed another in an attempt to strengthen clan alliances. He can keep Helene as a mistress, but not as his wife. Helene has lived her whole life at Breaghacraig and has left it all behind to marry Dougall. She refuses, however, to remain at Castle Treun as his mistress. Fleeing in the dark of night with no idea how to return to Breaghacraig, Helene stumbles upon a beautiful stone bridge. Devastated and alone she contemplates life without Dougall. As she pleads aloud for someone to help her, she is engulfed in a thick fog and when it clears she finds herself in the year 2016 in San Francisco, California, where Dougall’s betrayal has led her into the arms of the kind, handsome stranger who saves her in her hour of need. ?

Her Trusted Highlander - Book One of The Mackalls of Dunnet Head

Katriona Hughes has no idea how she’s managed to find herself in 16th century Scotland, but she’s beginning to think the gigantic emerald gem she picked up on an archeological site may have had something to do with it. Wanting nothing more than to return to her own time, Kat is betrayed by the first person she meets and forced into a marriage with a loathsome stranger. Now running for her life, Kat meets the one man who deserves her trust, but can she give it to him. Nick Mackall is happy to finally be back in his beloved Scotland after accidentally being transported to twenty first century San Francisco and spending the last two years of his life there. His home and family are calling to him, but things are not about to go smoothly for the handsome highlander as he meets a young woman fleeing her husband and an old foe returns from the dead. Two things are certain - he must gain the woman’s trust in order to save her and he must stop his foe from unleashing the power of an imprisoned sorcerer

Separated By Time - Book Three of The Thistle & Hive Series

A vision of disaster has Edna Campbell sending her niece, Maggie MacKinnon, a fledgling witch, back in time to sixteenth century Scotland in an attempt to save the MacKenzie clan and to face a mirror image of herself in the form of an evil witch named Brielle. Disguised as a young lad and accompanied by her Uncle Angus, Maggie must prevail in this life and death chess match of witch versus witch. There is much at stake, including the fate of her budding relationship with Dylan Sinclair, her future as a witch and the very existence of the bridge through time. Dylan Sinclair is on the adventure of a lifetime, having travelled back in time to Medieval Scotland. Handsome and charming, he is a magnet for women, but the only one he’s interested in, is back in twenty first century Glendaloch, or so he thinks. Brielle, disguised as Maggie, arrives at Breaghacraig, much to Dylan’s surprise and confusion, as he realizes she is very different from the girl he thought he was falling in love with. Not one to give up on his first chance at real love, Dylan sets about trying to solve the puzzle that Maggie has become.