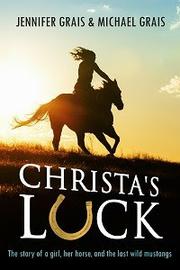 In Michael and Jennifer Grais’ YA novel, a 13-year-old’s fate intertwines with that of the legendary Lost Herd of wild mustangs that roams the canyons of Nevada.

Christa Cassidy knows that she’s lucky. She lives with her parents and older sister on a small ranch in a beautiful part of the world; she has a grandmother who loves her; and she’s expecting a baby sister before the end of the summer. She even has her own horse named Lucky. But like any other teenager, she’s suspended between childhood and adulthood, unsure of her place in the world, at odds with her family, and uncomfortable with the way she looks, talks, acts, and feels. She’s really only at home when she’s sitting on a horse—particularly when she’s trying to track the Lost Herd through the canyons around her home. But when something horrible happens to Lucky, Christa’s world is upended, and things only get worse when it becomes clear that the Bureau of Land Management intends to round up the mustangs. With the help of a strong, troubled horse named Jenner, Christa is determined to figure out what’s going on. She soon finds that she must rein in her own passions as well as her horses, and she won’t accomplish anything without friends and help. Every aspect of this novel is competently done, including the accurate, empathetic descriptions of Christa’s teenage peevishness, the character studies of the various horses, and the appealing descriptions of the starkly beautiful landscape where the mustangs roam. Michael Grais, the co-screenwriter of the 1982 film Poltergeist, and his wife, Jennifer, develop the plot handily, with a slow build toward a final, cinematic crisis in which Christa and her friends enact a daring rescue. However, the build may be a bit too slow, as it seems as if the story could have been accomplished in less than 200 pages instead of more than 300. There are also so many serendipitous sightings of the Lost Herd that it really doesn’t seem very lost, after all. In the end, however, this is a satisfying YA novel—with a bold, visionary, and active young heroine, to boot.