Jessica Angelina Birch (pen name) is a family physician in Amherst, New Hampshire. She owns and operates her own family practice and advocates for gender diversity. She was born in the small town of Greenfield Massachusetts, attended college at Brandeis University in Waltham Massachusetts, and received her medical degree from the University of Massachusetts in Worcester. She is a Unitarian and a member of the Academy of Family Practice.

“An honest, heartfelt memoir about coming out and transitioning.”
– Kirkus Reviews 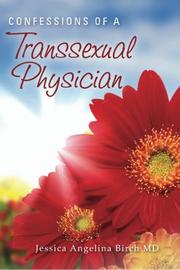 CONFESSIONS OF A TRANSSEXUAL PHYSICIAN

Birch never felt right in her body. She remembers a detailed, harrowing dream of retreating into the forest to commit suicide. Readers are catapulted to Birch’s boyhood as Jacob Mathewson, a quiet, awkward boy born with ambiguous genitalia. Tormented by his peers at school and by his mother at home because of his “birth defect,” Jacob explores his “female side” by dressing in girls’ clothing. College was “the time when I first realized how much Jessie could help me. I would come home from school and lock myself in my room, dress as a girl, put [makeup] on, and magically my homework assignments became much easier to complete.” And so Jacob sets out as Jessica on a path to discover where the feminine tendencies lead. Over the course of her journey, Birch continually seeks approval from others. She has a bad habit of imprudent attempts at friendship. Most troublingly, she develops an obsession with her therapist, sending her anonymous, unwanted gifts and unnerving letters. This fixation and her inability or unwillingness to see its inappropriateness has a climactic, disturbing outcome. Captivated yet confounded by her own thought patterns—she constantly worries that she’s going insane—Birch goes on to describe her struggle later in life, as she comes of age and contends with her own sexual and emotional immaturity. She interchangeably uses the terms “intersex,” “transsexual” and “transgender,” which might irk some contemporary LGBT scholars and activists, but Birch’s sincerity and enthusiasm are undeniable. Framed as a plea for absolution from family, friends and God, this memoir reads as an extended explanation and apology for the hurtful, misguided decisions she’s made over the course of her transition. “If through my actions, I’ve hurt anyone intentionally or unintentionally,” she says, “may I be forgiven?”

An honest, heartfelt memoir about coming out and transitioning.

The Time in Between by Maria Duenas

I have an ability to see the world differently

All forms of dance and self-expression