Jim Story is a novelist, short-story writer, poet, and author of the recently published and much-acclaimed novel Problems of Translation, or Charlie's Comic, Terrifying, Romantic, Loopy Round-the-World Journey in Search of Linguistic Happiness .

A former Okie blues singer and Russian history professor, Jim has published short stories, essays, reviews and poetry in Confrontation, The Same, Karamu, Folio, Pindeldyboz, Helicon, Aspen Anthology, Berkeley Poetry Review, Steelhead Review, Now, Paper Boat, Hyn Poetry Anthology, Poets, Big City Lit, Long Island University Magazine, And Then, and Home Planet News, for which he served several years as Executive Editor. He's been nominated for a Pushcart Prize (for a series of poems called "Notes of a Forty-Year Old Country Boy"), won a Best New Writers Award from Poets & Writers, and held a residency at the Edward Albee Center in Montauk, Long Island. He has studied with Ben Fountain at a Zoetrope Conference in Belize in 2007 and with Jim Shepard at Sirenland in Positano, Italy.

A story called "Milwaukee Dawn" appeared June 2015 in BigCityLit.com. Forthcoming publications will include a collection of short stories called Love and Other Terminal Diseases and a novella called Wounded by History, which National Book Critics Circle award winner Ben Fountain has already called "swift, profound and engaging." Jim's cultural and literary blog can be accessed at jimcstory.com by clicking on Today's Story.

Born in Oklahoma and raised on a ranch in the San Joaquin valley in California, Jim holds a PhD from Columbia University, a certificate from the Harriman Institute, and has taught at Whitman College in the state of Washington, as well as Long Island University (Brooklyn Center) and Lehman College in New York. Jim, a former San Joaquin Valley Small Schools Tennis Champion in high school (singles and doubles), is an enthusiastic follower of tennis and jazz. He lives in New York City, where he is currently at work on his next novel.

“A sure-handed narrative led by a hapless but resilient adventurer.”
– Kirkus Reviews 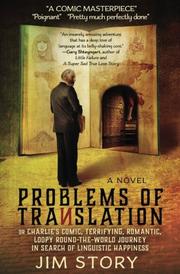 High jinks ensue in this picaresque novel when an author sets out ’round the world to shepherd his short story through several translations.

Novelist Story introduces readers to middle-aged Charles Abel Baker, who, like Story, is a writer and former professor of Russian history. Bored and stuck in his life, Charles desperately needs a project, an adventure. He decides to take a short story and have it translated through 10 different languages, then back into English to see whether at the end, à la a game of Telephone, it is even remotely like the original. He tries to interest high-powered publisher Derek Wainscot in the project and is rebuffed. But then Wainscot steals the idea himself, and that means deploying shady operatives to follow Charles and frustrate his plans whenever possible. But an old friend of Charles’, Jonathan Belknap, a retired CIA agent, smells a rat and deploys his own crew against Wainscot’s. The result is a merry, yearlong chase around the globe. Early on, Charles meets Svetlana Novgorodtseva, and love blossoms, fades, blossoms again. An unlikely adventurer, Charles gets out of one impossibly tight spot after another, sometimes by his own devices, sometimes thanks to Belknap’s long arm. There is more, much more, and it moves fast. Story is impressively inventive, and though this yarn is a zany one sure to induce a few grins, it’s not quite a gut-busting affair, especially when, for instance, a drug lord makes a point by executing a young kid in front of Charles. That hardly rates a guffaw. Still, the amusing spy-vs.-spy business involves old hands with handles like “Pig” and “Smilin’ Jack,” and Story is adept at the quick surprise and the odd plot twist. Short and punchy chapters feature background rumination about the beauty of words and the mysteries of translations.

A sure-handed narrative led by a hapless but resilient adventurer.

In 1971, Clayton Poole is a 34-year-old journalist for the Rolling Hills Reporter newspaper in Montana. In the paper’s “morgue” of articles from other news outlets, he’s startled by a recent piece about a woman in Washington state who confesses to killing her estranged husband with a gun that a “mysterious stranger” gave to her. This discovery leads him to call an emergency meeting with his editor, but the exact reason for his excitement isn’t immediately revealed. In 1965, Rusty Thomas meets a waitress named Maddie in a diner at the limits of Southeast City, Washington. He presents her with a pair of nylons that he won in a radio contest. Their ensuing relationship is troubled by the specter of Maddy’s past. In 1952, Travis Mackey is a 15-year-old youth who lives with his father, the caretaker of a shutdown gypsum mine in the Coast Range in California. Ever since his mother’s untimely death, his dad has taken to beating him regularly. One day, on a deserted country road, he looks up and sees a condor, and he imagines it swooping down to sink its talons into the old man. Not long afterward, a stranger appears at the mine toting a gun. The narrative spans almost seven decades, beginning in 1952 and concluding in 2018, but author Story proves to be a master of the slow reveal, gradually pulling away the veil that shrouds a secret that’s central to the plot. He does so by sharing details of his characters only when readers truly need to know them, and not before. Regarding Rusty, Story writes laconically, “Though he lived close to the heart of the town, near the college, he was customarily drawn to peripheries.” Such revelations lead to further questions; for instance, is Rusty drawn to peripheries because he has something to hide? The novel’s epilogue is somewhat long-winded, unnecessarily tying up every loose end. Otherwise, though, this is a smartly conceived, beguiling tale that few readers will forget.

Love and Other Terminal Diseases

The thirteen short stories in this collection vary in tone and time period, as well as in the age and gender of their protagonists. But what they have in common is that they are all about love. Too much. Too little. Love's permutations, complications, substitutions--and the way it can sometimes lay waste the psyche. Stories from this collection have been published in Folio, Pindeldyboz, BigCityLit, And Then, The Same, and Confrontation.

A young Russian history professor back in the seventies. Sexual intrigue. Campus politics. All leading to.... But why give away the rest of the story? Here's what others are saying about this exciting novel looking for a publisher: "Swift, profound, and engaging, Wounded by History gives us a vivid portrait of American academia and its "casualties" in the 1970s. Jim Story's novel is laced with humor and a heartfelt passion that resonate all the more deeply for their sharp satirical edge. This fine novel satisfies on all levels." — Ben Fountain, winner of the National Book Critics Circle Award for Billy Lynn's Long Halftime Walk, as well as the Pen/Hemingway Award and Whiting Prize. ". . .Story’s splendid novella, Wounded by History, startles the reader with its surprises and ingenious disclosures almost as often as it startles the fiction’s brave, if somewhat naïve hero, Edgar Holmes, passionate teacher of Russian history. In this remarkable work of comic irony and its world of 1974 American academic politics,. . .Story’s 21st Century hero finally realizes he must rescue himself from himself or succumb to his wounds and become a victim." — Philip Miller, prize-winning poet and the late editor/publisher of The Same