Jingwei (??), b.1945, is a research scientist in medical-biochemistry. Retired in 2007, he has studied the Dao De Jing very closely, and uniquely has discovered the scientist in Laozi, the philosopher. He believes he has demystified, not the man, but the book that has been baffling interpreters for centuries, and has succeeded in making it enjoyable to both the general public and the serious scholars, with the self-publication of this non-fiction monograph.

“Jingwei gives the readers all 81 chapters of the Dao De Jing, in both the original Chinese and in English translation.”
– Kirkus Reviews 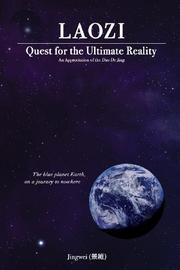 Jingwei offers a new translation and analysis of an ancient Chinese text.

Serving as an archivist for the imperial court of the Zhou Dynasty (circa sixth century B.C.E.), Laozi postulated that the universe was formed by Dao, the benevolent spirit of the bellows, who creates and asks nothing in return. Laozi compiled his thoughts in the Dao De Jing, encouraging readers to model their actions after the nurturing Dao: “He suggests reconciliation in response to grievance suffered, and to embrace the gentle, feminine way in life.” Jingwei gives readers all 81 chapters of the Dao De Jing, in both the original Chinese and in English translation. These are followed by sections labeled “Laozi’s thinking,” which breaks down the text further, and “Comments,” which delivers a more modern interpretation of the text. Following the 81 chapters are supplementary sections that analyze the text by theme—“On Fears and Crises”; “On Femininity Appreciated”; “On Freedom”—as well as some thoughts on the composition of the text and the intentions of Laozi. Jingwei has used a very small font for his debut book so that each chapter fits on one page. The volume’s 200-page length belies the amount of material found therein. Jingwei’s translation remains clear and easy to follow, and the notes further clarify the text. Chapter 61, for example, begins: “Whatever big nation, be low flowing (humble) / Be the world’s female.” “Laozi’s thinking” reads: “For big nation, be humble; be like the mother of the world.” The “Comment” reads: “Here Laozi simply urges nations to behave with humility to avoid conflicts with each other.” The reiteration of each concept (in verse, then ancient note, then modern note) has an almost meditative effect on the reader, and the frequent use of metaphors from nature allows discussions of conflict and strife to be removed from any emotion-laden, real-world context. Jingwei occasionally falters in his English, though never in a way that makes his intention unclear. He states that his purpose in this translation is to bring the text to a wider audience, and in this he has succeeded.

An accessible and informative presentation of the Dao De Jing.