I'm a businessman, family man, walking man (4,000 miles in 2016!), and a novelist. Married many years with two grown daughters.

My novels explore the collision of our everyday world with a secret dimension where time travel is prevalent and supernatural creatures abound. The heroes are befuddled. Heroines spunky. And my stories examine how these poor souls try to process the impossible events taking over their lives.

Faulty Bones is the opening story in my Gabriella Trilogy. Kirkus does a great job in their review of this debut novel, but for more, here's the back-of-the-cover blurb:

Two bankrupt card players, lured by black magic and a casino-chip counterfeiting scam, get lost within the folds of a world no longer true.

Faulty Bones follows the journey of Mike and Amy--a couple of restless drifters who misdirect their anchors to the shifty part of town. Can they overcome her gambling addiction and his tenuous grasp of reality to find their way back on the grid? A pair of scheming mobsters, a demonic con man, and a series of ripples in the sands of time won't make the going easy.

“the affecting depiction of Amy's struggle to right her life, along with the complex plot, give the novel depth and excitement”
– Kirkus Reviews 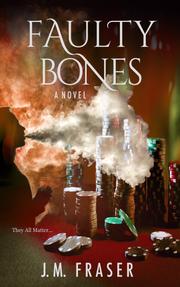 In the opening chapters of this novel, card players Mike and Amy meet cute at a New Orleans poker table. And then they meet cute for the first time again. The reason: Mike keeps waking up in amnesiac hazes, and each time, he pieces together evidence that his personal chronology has been undone by supernatural forces. He repeatedly hustles to right his timeline, reunite with Amy, and maybe get to the World Series of Poker. Meanwhile, 20-something Amy, a compulsive gambler who “eloped with [her] mom’s chiropractor” at 16 and who’s now 11 months into a streak of bad luck, is embroiled in a scheme to launder counterfeit poker chips for the Russian mob. Mike and Amy’s world of seedy casinos and poker players is rendered with many persuasive details, such as Mike’s knowing assessment of other players, “the type who cut their teeth on the Internet in fast, multi-table action, playing six, ten, twelve tables at a time like chess masters.” As a result, the tension that Fraser builds in the betting scenes will be accessible even to poker neophytes. As Mike and Amy’s parallel plots unfold, they alternate first-person points of view; both are engaging, but there are times when the shared tics of their voices blend together (both use the term “the girlfriend experience,” for example). The author’s droll humor comes through in the lovers’ observations about their bad luck and in the mundane pettiness of the magical beings manipulating them. (One of those beings complains about the matchmaking spirits’ union: “The grievance-filing process takes forever. Even if we win, the inevitable appeal ties us into knots for ages.”) The combination of time travel and the couple’s playful game of changing their names every day somewhat muddles the narrative, and there’s a late-breaking political subplot that becomes extremely unwieldy. However, the affecting depiction of Amy’s struggle to right her life, along with the complex plot, give the novel depth and excitement.

A tale of destined love that successfully weds the charms of fantasy worldbuilding and shaggy dog stories.

THE WITCH OF THE HILLS

In this fantasy/romance, a teenager’s destiny may encompass falling for a witch and saving a hidden realm of dreams while safeguarding his own world.

Heading to Wisconsin for college, Brian Danahey’s solo road trip is sidetracked by car trouble, an apparently empty tank. Luckily, Rebecca Church shows up and offers her cabin as a temporary refuge. She’s the girl of his dreams; that is, she looks just like the figure being pursued by a hangman in Brian’s recurring nightmare. Turns out Rebecca’s been waiting for Brian, certain he’s the one prophesied to stop an imagination-eating void from swallowing all of the World of Mortal Dreams. Without nourishment provided by the waking world’s cousin, people’s spirits will shrivel and die. Strictly adhering to the Witches Code, Rebecca can only relay information to Brian via riddles, dreams, or illusions. Starting with a book of Rebecca’s poems, Brian slowly learns about the other realm and the prophecy. He finds unexpected allies along the way as well as adversaries, particularly Abigail, an imp who hates Rebecca. More important, he untangles Rebecca’s intricate past: she’s effectively a prisoner, and Brian may be more determined to rescue the girl he loves than the dual worlds. Fraser’s (Faulty Bones, 2016) Romeo-and-Juliet tale brims with preternatural turns and diverting romance. Thwarting the void entails a few tortuous decisions, such as Rebecca having a limited number of times to see Brian before disappearing forever. But the young couple’s evolving relationship is the engaging story’s focus and true essence. The two are generally apart, making their shared scenes all the more endearing, while Fraser opts for more lighthearted humor than sweet nothings. Readers, for one, are treated to a glimpse of possessive Rebecca telling Brian’s video store co-worker: “I see you’re still hanging around my Brian!” Traversing another realm likewise allows for enjoyable appearances by a historical figure or two and a tie to a relevant, centuries-old event in Salem.

An often jaunty and thoroughly entertaining story of young love.

An angel tries to save the grim alternate world she’s inadvertently created in Fraser’s (The Witch of the Hills, 2018, etc.) fantasy.

After witnessing the horror of the Hiroshima bombing, Angel Gabriella decides to make a change. Believing the source of trouble is religion, as many varieties are “magnets for violence,” she travels back nearly 2,000 years via the World of Mortal Dreams. She uses dreams and persuasion to convince someone to eliminate one particular religion’s founder, but a return to the 1940s reveals nothing has changed. Gabriella learns her actions have split the world in two, and a couple millennia later, the alternate universe is no better than the original. The other world may need a messiah, and Gabriella finds one in each world: Carla and Maynya. Evidently, splitting the universe also split souls, and the angel plans to reunite the girls’ souls. A strategy slowly forms, involving Carla’s death in 2012 and a man in the original world named Brewster DeLay, who, like Carla, has a counterpart in the other. Brewster and Carla meet in dreams (they’re separated by time; he’s one year into her future). But as they both fall for each other, they may search for a way to cheat death. Though Fraser’s story lingers on Brewster and Carla’s developing relationship, it also bounces between worlds with ease. Gabriella, who retains the appearance of a young girl, is fascinating. She sees signs from God but acknowledges mistakes, and there’s even a question of what she genuinely is: an angel, fallen angel, or something else. Fraser takes the material seriously and openly addresses religion without deriding or criticizing any specific one. Lightening things up, however, is radiant prose: “Falling leaves paint-gunned the lawns in a variety of autumn colors. He caught a whiff of burning brush, a seasonal fragrance saying trick or treat.” There are few surprises, but the story picks up in the final act when characters in both time periods ultimately converge.

Riveting time periods tied together by a delightfully eccentric protagonist.

President of a small finance company