Joan Boothe has been fascinated with Antarctic history since childhood, when she first read stories about explorers like Roald Amundsen, Robert Falcon Scott, and Ernest Shackleton. But it was decades before she was actually able to see Antarctica. Finally, in 1995, she made her first trip south, as a tourist to the Antarctic Peninsula region, the subject area of The Storied Ice. This trip turned what had been a simple fascination into a passion, and ten more journeys south have followed, including a 67-day circumnavigation of the entire Antarctic continent aboard an icebreaker.
When Joan returned home to San Francisco in 1995, she decided that she wanted to know much more about Antarctic history, and began to search out books to read. The result was an ever-growing personal Antarctic library, which as of 2013, contains more than 1900 different titles plus thousands of journal and magazine articles. In 2009, concerned with the future fate of her by-now extremely comprehensive Antarctic book collection, Joan entered into an agreement with Stanford University’s Green Library to donate the entire Antarctic collection to Stanford.
Although not educated as a historian, Joan is a trained social scientist. She graduated from Wellesley College, where she was elected to Phi Beta Kappa, with an honors degree in economics. Later education included doctoral work in economics at Columbia University; an M.B.A. in finance from the University of California, Berkeley; and doctoral studies in organizational behavior, also at Berkeley. Ten years in the classroom teaching principles of management to M.B.A. students honed her ability to organize her thoughts and present ideas.
Joan’s passion for Antarctica is equaled only by her desire to share her knowledge with others. When her daughter and husband began asking what she was going to do with “all those notes,” the only reasonable answer was to write a book. The Storied Ice is the result.
As an experienced lecturer, Joan loves to talk about Antarctic history. She was thus delighted when the expedition staff on one of her Antarctic trips asked her to supplement the staff historian’s offerings with a lecture. She had given similar “guest” lectures on four more of her trips. In the spring of 2010, Joan taught a course in the history of Antarctica’s Heroic Age for Stanford Continuing Studies Program. Student response was overwhelmingly enthusiastic.
Joan was elected to membership in The Explorers Club in 2007. Almost immediately after her election, she became active in the local, Northern California, chapter of this international organization. She is currently serving as Vice Chairman of the chapter.
In addition to her Antarctic interests, Joan has been actively involved for years in community affairs in San Francisco, where she has lived since 1970. She has served as an officer and/or on multiple non-profit boards during this time. In 1993, Joan helped found the Sierra Nevada Alliance, an organization that today is an important voice in the California environmental community.
Joan also has experience in the corporate world. From 1975 to 1987, she worked for Chevron Corporation, in a series of increasingly responsible financial analysis and management positions.

Joan is married to Barry Boothe. They will be celebrating their 47th anniversary this year. She and Barry have two children, both of whom were born and raised in San Francisco.?

“...serious readers, armchair historians and geography or maritime buffs will find it a most rewarding journey.”
– Kirkus Reviews 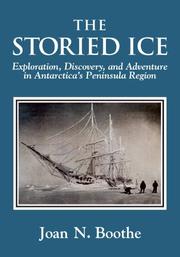 Owing to numerous nearby islands that aided nautical exploration, the Antarctic Peninsula, jutting 1,000 miles north of the main continental mass, is where humans first explored the last-discovered continent and where most tourists visit today. Similarly, Boothe uses the Peninsula region to hook readers. The subtitle notwithstanding, this book doesn’t so much confine itself to the Peninsula as make it the face of Antarctica, the starring character in a geographic drama spanning 500 years—an alluring but indomitable mistress beguiling and frustrating suitor after suitor. The main title is dead-on. Ice is an ever-present antagonist thwarting all who dare challenge the harsh environment, and Boothe tells their stories with such authority, readers forget she was not part of their expeditions. From the legendary—Magellan, Cook, Shackleton, Amundsen, Byrd—to lesser-known sealers, whalers, meteorologists and geologists, she captures their motives, struggles, heartbreaks and triumphs. Men suffer frostbite and scurvy. Pack ice traps, crushes and sinks their ships. They must shoot and eat their sledge dogs. Those who survive, return, gradually claiming new territory and earning the place-names on today’s maps. Boothe has accomplished a difficult task—producing a historical account scholarly enough for textbook use while engaging enough for a general audience. The feat is all the more remarkable considering this is her first book. Her fascination with Antarctica dates to childhood, and her travels include circumnavigating the continent on an icebreaker. First-hand knowledge is evident, along with impressive scholarship. Literature cited runs to 311 entries, and the endnotes contain (for some readers, “bury” is perhaps more accurate) a wealth of information. Three appendices, a glossary, timeline and “firsts” provide still more information. In-text maps, figures and photographs abound. Large- and small-scale maps of Antarctica thoughtfully placed on the inside covers and end pages facilitate frequent referencing. For those accustomed to browsing glossy photographic surveys of icebergs, penguins and sea lions, this 373-page tome may loom as a foreboding trek, but serious readers, armchair historians and geography or maritime buffs will find it a most rewarding journey.