Born in New Orleans, Jody Summers’ life has been filled with unconventionality. The adopted son of a prominent Texas restaurateur, Jody grew up in New Orleans, Memphis and then Houston, learning the restaurant business while he built a career as a competitive gymnast that propelled him to a scholarship at the University of Kansas.

After college, Jody followed in his father’s footsteps owning, at one point, three 24 hour restaurant franchises along with four tanning salons in Tulsa. Finally leaving that business, he turned his entrepreneurial skills to everything from a patent in the Pet Industry to a Single’s website.

A restaurateur, a gymnast, a stunt man, an entrepreneur, a pilot, skydiver, scuba diver, and an accomplished martial artist for twenty-five years, Jody Summers has tried it all. Now he brings all those experiences to paper in his novels.

“A… tense and satisfying thriller that does justice to its weird and macabre premise." --KIRKUS REVIEWS”
– Kirkus Reviews 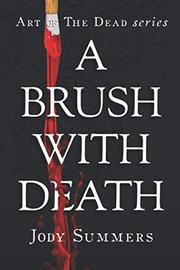 A BRUSH WITH DEATH

In this debut psychological novel, a painter’s new method unlocks the power of extrasensory perception, giving her access to the dark secrets of others.

Kira, a painter living in New Orleans, has just started a new business called Canvas of Life. When her mother died and was cremated, Kira made a work in her honor by mixing her mom’s ashes with the paints. Now, for a price, she makes paintings that commemorate the deceased and incorporate their ashes. Her first client is a woman named Louise Grayson, who is shocked by the final product. Kira has somehow accurately rendered Louise’s father without seeing a picture. Kira’s second commission is from a widower named Wes Kingsley, and again, her painting says more than she’s been told. It shows that his wife committed suicide because Wes beat her. When he sees the work, he is shocked: “ ‘Oh my Nina!’ he finally exclaimed quietly. ‘It’s her! How did you…how could you…?’ ” Things really get interesting when Kira takes on a third client, Sean, a farmer from Kansas City whose adoptive father has just died. Sean is an empath—“I feel people’s feelings around me,” he tells Kira. When he visits New Orleans for a consultation, they immediately fall in love. But Kira’s painting of Sean’s father begins to unearth dark secrets he hid from his son. Summers’ entertaining novel is well structured and briskly paced. With plenty of foreshadowing and characters stricken by one premonition after another, the taut tale achieves an enjoyably ominous mood. But the author relies too heavily on dream sequences, which, fueled by ESP or not, grow tiresome after a while. Sean, in particular, is a wearying character: Not only can he read a person’s every mood, he also feels the need to comment on it. On top of that, he writes terrible poems: “In your eyes I saw a light / That shines into my heart so bright.” A real empath would keep the verse to himself.

A flawed but tense and satisfying thriller that does justice to its weird and macabre premise.

A Brush with Evil

A madman who moves particles with his mind laughs when he twists the small bones of a victim’s foot for kicks. Soon, he is closing throats and pinching blood vessels to extort money. It’s only a matter of time before he grows even bolder. Artist Kira McGovern--who can channel the emotional lives of the dead when she paints with their ashes--discovers the madman’s secret while working on a tribute portrait of a famous Hollywood star. Everyone thought she died of natural causes until Kira relives the uniquely hideous way the madman murdered her. Why did he kill her? What does he want? And why is he threatening a scientist on the verge of a cancer breakthrough? Together, Kira and her empath-partner Sean hunt the killer and are forced into a deadly negotiation with him. Will the madman double-cross them and kill them silently with his incredible ability? Or will they be able to manipulate him to help with a medical crisis of their own?

A Brush with Fire

A murderer is skinning the faces of victims and stretching them over wooden masks, then setting fires and staking the masks into the ground. The faces are left to watch the blazing inferno so that the dead can witness everything burn to the ground. The FBI is at a loss for leads and motives. In desperation, an agent asks New Orleans painter Kira McGovern for help. She is, after all, the painter who solved the cold case of a serial killer when she painted with the ashes of the murderer and unleashed its secrets. Would she paint with the ashes of the victims to see if—by channeling the memories of the dead—she could provide any leads? Reluctantly, Kira agrees. From the moment her ash-swirled paints hit the canvas, she and her fiancé, Sean Easton, realize they’ve tapped into a twisted madness that shakes them both to their core. Worse, somehow, this mad energy senses it’s being hunted and pushes back—with murderous intent. The tables soon turn and it’s Kira who is being hunted. Can she and Sean escape the fiery evil that set its sights on them? Or will they become just two more victims, faces stretched over wooden masks, to witness Sean’s beloved farm burn?
Published: Sept. 10, 2019
ISBN: 978-1-7331775-3-5 ebook