Joel Peckham has published seven books of poetry and nonfiction, including Bone Music (SFA), Body Memory (New Rivers), and Resisting Elegy (Chicago Review). Individual poems and essays have appeared recently or are forthcoming in Prairie Schooner, The Southern Review, The Sugar House Review, Cave Wall, The Beloit Poetry Journal, The Sun, and many others. With Robert Vivian, he is also co-editor of Wild Gods: The Ecstatic in American Poetry and Prose, recently released by New Rivers Press. His first Spoken Word LP, Still Running: Words and Music by Joel Peckham, will appear from EAT POEMS in the fall of 2022

“A superb collection of poems that are haunted by grief yet touched by grace.”
– Kirkus Reviews 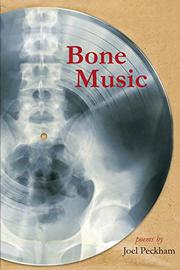 A volume of poetry explores how art shapes connections beyond the randomness and tragedy of loss.

The title poem of Peckham’s latest collection (many pieces were previously published in literary journals) refers to clandestine recordings of jazz and rock ’n’ roll banned in the 1950s Soviet Union. Bootleggers cut discs from used X-rays, burned a hole in the center with a cigarette, and employed a recording lathe to transfer grooves from a gramophone record onto the plastic. These makeshift discs could then be played like any record, though they were short-lived and had poor sound quality. These discs were called ribs, music on ribs, bone music, or jazz on bones. This startling, potent metaphor is central to the book and its images of accident, breakage, loss, healing, and transcendence. X-rays capture moments of crisis, when the broken bones are “halted in ghostly / bloom,” but this is also the time when diagnosis and rehabilitation can begin their inherent process “the way bones do, all on / their own reaching for bone, reaching to make you / whole.” In their low-fidelity, scratchy fragility, the X-ray discs mimic how the body retains its injury, so that a once-broken bone aches in the cold. The poem then turns to the 2004 auto accident in Jordan that killed the author’s first wife and older son, an event that lies behind the entire collection. In the hospital, the speaker “lay in a hospital bed looking at the x-rays / of my shattered hip and the fiery brightness of the pins and screws / and white-hot wires and the clouds of tissue forming around them,” which tell “of choices, and / accidents.” And yet, like the jazz recorded in bone music, “an off-note, a mistake, can be embraced by the soloist.” Even overwhelming tragedy can give rise to the grace that is art; in the end, says the speaker, “Yes, these bones can sing, set all my comrades dancing, / to a ghostly tune.”

Throughout the moving collection, Peckham never suggests that the healing, soulful work of art is easy, only that it’s possible through faithful attention. One significant form of attention is listening, which ties in with the volume’s many images of music, especially improvisational music—the kind that makes art of accidents. While nearly all the pieces in the book are prose poems, they’re far from prosaic. The form works well to suggest the poet’s urgency to speak about wholeness. Techniques like alliteration and assonance supply the music of poetry, as in “Suffering Tape.” Here, the sibilants match the swoosh-y visuals of wheeling starlings and glinting fish scales: “Sun and shadow as I shook and took the / shape of starlings flocked or the flame of sunfish staring up at night / from the windshield’s blue-black pond.” Another strong throughline in these poems is stargazing and astrocartography, another kind of attention that requires seeing and making connections: “We place a thing near another thing and it throws a spark, / makes a third somehow in there and out, a process we name art (or / God?).”

A superb collection of poems that are haunted by grief yet touched by grace.

Associate Professor of Literature and Creative Writing at Marshall University

“Is sorrow the true wild? And if it is—and if we join them—your wild to mine—what’s that? For joining, too, is a kind of annihilation. What if we joined our sorrows, I’m saying. I’m saying: What if that is joy?” ? Ross Gay, The Book of Delights

"Joel Peckham's writing is essential reading for me. He's a contemporary whose work I need to read to understand the world I live in. His first collection, RESISTING ELEGY, hit me as a revelation because of its intimacy, its depth, and its unflinching honesty—not only with the reader, but with himself. There are very few people in the world willing to take such a terrifying journey into the essence of their own lives and far, far fewer with the skills to take us along with them. Peckham is one of those people and his voice guides us through a darkness we'd be too afraid to explore alone. And then there is the writing. Peckham's exquisite language does what writing is supposed to do—envelope you in a new universe and take you on a dramatic and emotional journey. His new collection, BODY MEMORY, continues what is now his hallmark: It explores the deeply personal and hard-to- articulate understandings of what it means to both have a body and also be one. His fears, his phobias, his frailties are all on display so we can better understand ourselves and what it means to be alive—and to be grateful to be alive—today."—Derek B. Miller

In this thoughtful collection of narratives, author Joel Peckham explores the transformative power of emotional and physical pain from the vantage point of a husband and parent who lost his wife and a child in an accident thatleft him in chronic distress. Along the way, he ?lls a need for a brutally honest literary examination of not only grief and suffering, but also of recovery. There are no heroes in these pages, and the author has consciously resisted the mythmaking impulse--that desire to honor the dead and to give tragedy purpose by telling a sad but inspirational story. Instead, the book does a great deal to counter our assumptions about grief and suffering-- assumptions that do damage both to those in pain and those who try to comfort them.

Joel Peckham's Still Running is the ultimate pandemic project. With all poems and musical compositions written and performed by the author, the collection explores isolation through the lens of grief and redemption all while swimming through and surfing over music and vocals that genre hop from freak-folk, to garage rock, to punk, to psychedelia and R&B. It's a messy audacious, perfectly imperfect, and unapologetically personal act of an artist struggling to respond to a collapsing world.

Wild Gods: The Ecstatic in Contemporary Poetry and Prose

"There's something about ecstasy that scares us. It scares me. Perhaps it is the fear of losing control, or the fear that maybe we never really are in control, that all the learning, and reading, and studying in the world can't lead us any closer to wisdom or to God. That there is something we are missing, that exists at the corners of the eyes, that is right there, but sneaks up from behind as we reach for it, then overwhelms us like a wave. We crave it and fear it. The ecstatic is not something we can control or construct or will into being; it comes from wilder places and speaks to and from and out of chaos: the irrational, the intuitive--the LSD experiments of the '60s, the raves of the '90s. It is the burning bush. It is the passion. For me it was a night in Jordan in a hospital after waking up to find out that I had been in a car accident and lost my oldest child and my wife, Susan. My hip was shattered. I was sweating with pain and morphine and grief and I screamed and writhed in it, never more fully in a moment my entire life, never more at the mercy of the world--so in my body and yet so beyond it."--Joel Peckham, from the Introduction