John Anthony Miller was born in Philadelphia, Pennsylvania to a father of English ancestry and a second-generation Italian mother. Motivated by a life-long love of travel and history, he normally sets his novels in exotic locations during eras of global conflict. Characters must cope and combat, overcoming their own weaknesses as well as the external influences spawned by tumultuous times. He’s the author of the historical thrillers, To Parts Unknown, In Satan’s Shadow, When Darkness Comes, and All the King's Soldiers, as well as the historical mystery, Honour the Dead. He lives in southern New Jersey with his family. 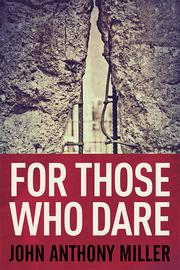 FOR THOSE WHO DARE

A novel traces how the construction of the Berlin Wall affects a group of residents.

In the early hours of Aug. 13, 1961, Kirstin Beck leaves her house in East Berlin with the intention of seeking refuge in the city’s Western sector. Doing so means leaving behind her husband, an older college professor with strong socialist convictions, but opens the door to new freedoms away from the oppressive Communist government. Yet as she approaches the border, she finds it milling with guards and workmen. In the following days, as barbed wire blockades are being constructed, it becomes clear that the perimeter is closing for good. Like many others, Kirstin has family in West Berlin that she may never see again, including her aging grandmother. Her only remaining option is to seek help from an acquaintance on the other side of the wall, an American writer named Tony Marino. With his foreign passport, Tony is one of the few able to cross the border at will. After a series of clandestine meetings, he finds himself committed to helping Kirstin and several of her neighbors. Among their number are Dieter Katz, a student undergoing rehabilitation for an attempted escape, and Jacob Werner, a former Nazi doctor under government scrutiny. As the operation grows, the danger mounts, and the government seems to always be a step ahead of their plans. With Stasi (the East German secret police) informants hidden among friends and family, it is impossible to know for sure who can be trusted. Miller includes many well-researched historical details, crafting a rich and descriptive setting. While the harrowing story focuses mainly on Kirstin and Tony, the point of view often shifts to members of the supporting cast. This allows for insight into the minds of many characters without ever revealing their true motives. The novel’s romantic elements are well executed, introducing an endearing subplot and further increasing the emotional stakes. The writing is full of tension and excitement, with compelling and realistically rendered characters. Although the ending is perhaps too neat, the buildup is riveting.

A suspenseful and moving work of historical fiction set in a divided Germany. 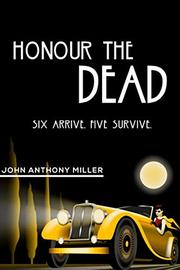 A woman’s outlandish fears may turn out to be quite real in this historical thriller.

World War I is over but its scars remain. On the shores of Lake Como, Italy, Englishmen and women cross paths at a sanitarium. Penelope Jones is certain that someone is trying to kill her while her husband and family are more inclined to think this paranoia is the product of a troubled mind, exacerbated by the untimely death of her brother. Dr. Joseph Barnett in part agrees, but at the same time he finds himself challenged by the patient, as she swings from insisting on violent attackers around every corner to making erudite observations on Shakespeare, drawn from a deep well of professorial knowledge. Further complicating things, Barnett is intimately familiar with Penelope’s husband, Alexander Cavendish. While Cavendish is renowned as a war hero, Barnett served with him in the trenches and hates the man, as does the doctor’s wife, Rose, who treated both soldiers for their war wounds. But even as the story reveals more about all these characters’ pasts, so too does the plot thicken in the present, as physical evidence that Penelope is under assault begins to emerge and the thorny emotional and financial reasons behind even her marriage surface. While Penelope at times speaks of past lives and conspiracies, the other characters must face up to the mounting uncertainty over just how much of her delusion is madness—and how much is truth. Miller (When Darkness Comes, 2017, etc.) promises a story full of twists and turns and complex relationships and resentments—set against a powerful backdrop—and he absolutely delivers. The prose is solid, if a little rocky around the various characters’ introductions, where exposition can drown out the rest of the scene: “Her ancestors had been at the forefront of British affairs for several centuries, revered by most of the Empire’s subjects, but the current generation was cursed by tragedy.” But after these early growing pains, the plotting moves briskly, switching perspectives as the characters’ relationships deepen and become more intricate, all the while peppering readers with new clues as to just who won’t make it out of Italy alive.

A page-turner rife with historical details and timeless intrigue.

All The King's Soldiers

Lisbon,1940: With Europe in turmoil and France falling, British agent Taylor Hartridge obtains the Nazi invasion plans for Britain. He suspects a double agent in the Lisbon Embassy and insists on taking the plans to London, but is murdered before his departure, the plans stolen. London analyst Simon Cole arrives in Lisbon, woefully unprepared but willing and determined, pitted against a German spy called the Chameleon, a master of disguise. Racing to recover the plans before the invasion is launched, Cole hunts for Hartridge's killer while exposing the double agent in Lisbon--even if it's the woman he loves.
Published: Feb. 17, 2017
ISBN: 978-1943789436

Berlin, 1943. British agent Michael York is sent to Berlin to solve the mystery of his predecessor’s death. A member of the Berlin String Quartet, four talented musicians, had offered the British Intelligence officer valuable information. But another member had betrayed him, and turned him in to the Gestapo. Each of the musicians has access to vital information and can easily be the one who betrayed York’s predecessor. York finds the quartet difficult to assess. Amanda Hamilton is lead violinist and a former Brit. Her husband is a German citizen, Manfred Richter, a high ranking Nazi. She could be the Gestapo informant, loyal to her husband even with his indiscretions. An amateur photographer, she has chronicled ten years of life in Germany, and is a favorite of Hitler. Erika Jaeger, second violinist, works in the logistics department of the War Ministry. Viola player Gerhard works as a draftsmen for the Armaments Department, with access to secret weapons. The last of the quartet, Albert Kaiser, has access to valuable information through highly-placed relatives. With the aid of a British master spy, Max, York works painstakingly to solve the riddle and gather information for the Allies. He must tiptoe through the streets of Berlin, always cautious, always aware, knowing that a child could betray him as easily as a grandmother. He approaches each member of the quartet, watching and waiting, probing their weaknesses and avoiding their strengths. As the months pass, he observes and assesses, learns their secrets, and evaluates their loyalties. Michael York must decide who is on his side, who is dangerous, and who is in danger. As the Gestapo slowly begins to close in on York, his friendship with Amanda blooms to romance and they plan their escape from Germany. Nothing can prepare him for the revelations that follow.
Published: March 1, 2016
ISBN: 978-1943789214

London, January 1942. London Times war correspondent, George Adams, is a tortured soul, devastated by his wife's death and rejected by all branches of the military. Destroyed by events he couldn't control, he can't face the future and won't forget the past. His editor sends him to Singapore, a city threatened by the Japanese, hoping the exotic location and impending crisis will erase his haunting memories. Within minutes of his arrival, George is caught in a near-fatal air raid that triggers a chain of conflict and catastrophes. Injured and sheltered underground, he meets Thomas Montclair, a crafty French spy, and Lady Jane Carrington Smythe, an English aristocrat, who are destined to share his adventures. When a Japanese general is murdered, Lady Jane becomes the prime suspect. The trio flees the enemy and their own troubled pasts, confronting personal demons as well as the Japanese. They chase their dreams and elude their nightmares, evading a manhunt that spans the islands of the southwest Pacific, their lives wrapped in a swirling kaleidoscope of death, doubt, and desire.
Published: Sept. 10, 2014
ISBN: 978-1940224589

Paris: 1942 Three lives intertwined in Nazi-occupied Paris: Paul, a brooding banker whose family was killed by the Gestapo, Rachel, a teenage Jew who leads her family's escape from the Germans, Claire, a demure bookstore owner who finds courage and conviction - all confronted by an infamous Nazi collaborator. In the sprawling network of catacombs underneath the Left Bank of Paris, they hide thousands of Jewish refugees, giving them new identities and leading them to safety. Together they move forward, outsmarting a ruthless enemy, overcoming obstacles, defying danger, moving farther and faster, almost invincible-until an innocent bystander notices something amiss and their entire world collapses around them.
Published: Aug. 2, 2017
ISBN: 978-1943789603