Having won Harrow School's top history prize John emigrated to Australia by boat at 18 to return to the UK two years later on a round-the-world road adventure trip in the footsteps of Alexander the Great. Making his fame and fortune as a serial media entrepreneur in film and video he culminated his career to be first to market with the invention of Internet TV in 1995. Retiring to the Algarve he renewed an interest in history, philosophy and metaphysics and has fulfilled an ambition to write with The Royal Secret whose concept was to bring history and metaphysics into a popular modern day context linking the past to the present and the future as a thrilling tale. Told through the eyes of a contemporary American woman seeking her own Holy Grail, following her billionaire husband's mysterious death, she decrypts previously undisclosed secrets of the life, loves and tragedy of the man who was Shakespeare, deliberately withheld in a conspiracy from Tudor times to today. From the Pharaohs to Christ to Elizabeth 1st to the plots of big bad pharma of today, eugenics, and the future of mankind in space, the book does not hold its punches in the decisions needed to survive which face each of us today and our children tomorrow. Having lived and worked in the US, UK and France John currently lives in Portugal with his wife and a multitude of stray mutts and is working on a sequel to The Royal Secret; and a book on his own life story.

“A dense, theory-packed book that will appeal to lovers of historical conspiracies.”
– Kirkus Reviews 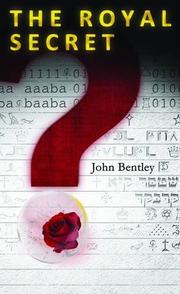 Mysteries, conspiracies, hidden identities, and secret codes abound in this debut thriller, which shuttles readers between the modern day and Tudor England.

Reclusive billionaire Abe recently died after finding an elusive plant-based formula that could cure all the world’s ills. However, his wife and lifelong assistant, Mrs. G., charged with the care of his grandchildren, is more concerned with the book she’s writing, which attempts to prove that the Elizabethan lawyer and philosopher Francis Bacon was in fact the son of Queen Elizabeth I, as well as the author of plays attributed to William Shakespeare. As Mrs. G.’s quest for answers takes her to England, and then to France, Germany, and Hungary, she finds herself drawn to Ethan, a mysterious, handsome priest who seems to share her fascination with history and cryptography. Little does she know that Ethan is more than what he seems, and that Abe’s formula might have global implications. Meanwhile, her story is intertwined with that of the life of Bacon as the novel alternates between past and present, spinning the tale of Bacon’s conception, birth, youth, career, and death. At times, this can be a bit much; at just under 450 pages, the novel packs in as many details—including dates, family histories, physical descriptions of characters, codes, Masonry, Rosicrucianism, Shakespearean quotes, and schools of religion—as it can. This often makes the plot lose momentum, as it gets sidetracked in discussions of the influence of the Masons in Washington, D.C., and the significance of the numbers in certain plays. In the present, Mrs. G. proves herself an engaging heroine. However, her storyline is similarly frustrating, as there doesn’t seem to be much of a mystery to solve; Bacon’s origins are revealed from the very beginning of the story, leaving readers in no doubt as to exactly who he is. Mrs. G.’s research doesn’t reveal anything new, but rather confirms everything that’s laid out in Bacon’s chapters, leaving no grand revelation at the novel’s end.

A dense, theory-packed book that will appeal to lovers of historical conspiracies but may leave mystery buffs cold.

"The power of accurate observation is commonly called cynicism by those who don't have it." George Bernard Shaw