John C. Beck is Chief Innovation Office at Arizona State University, President of the North Star Leadership Group and Senior Research Fellow at the Annenberg Center for the Digital Future. Previously, he founded Hult Labs, and served as the Dean of Globis University--the first non-Japanese to lead a bilingual professional degree program in Japan–and as a Professor and Senior Advisor at the Lee Kuan Yew School of Public Policy in Singapore. He was formerly Director of International Research at Accenture and a Senior Advisor for years at Monitor Group. Dr. Beck has been a Professor of Global Management & Dean of Research at Thunderbird School of Global Management. He earned his B.A. in East Asian Studies and Sociology summa cum laude from Harvard University, and was the first graduate of Harvard’s integrative Ph.D. program in Organizational Behavior. Dr. Beck has been a Visiting Professor at the International University of Japan, IMD (Switzerland), IPADE (Mexico) and ESMT (Germany). John has also taught at numerous other universities like: Harvard, UCLA, USC, and the Ivey School in Canada. He was the impetus behind The Economist’s Business Professor of the Year award. Dr. Beck served as the senior strategic advisor to the First Prime Minister, Prince Ranariddh, during Cambodia’s first three years as a democracy; and advised other presidents and prime ministers. He has hundreds of articles and nine books including the business best-sellers: The Attention Economy and The Kids are Alright. His books have been translated into eleven languages. He has appeared on CNN, CBS Evening News, BBC, Fox News and National Public Radio. He is quoted and cited in The Wall Street Journal, The Economist, The Financial Times, The New York Times and other leading papers and magazines. His latest books is Good vs Good.

“An eye-opening, even-keeled theory offering hope to those who disagree.”
– Kirkus Reviews 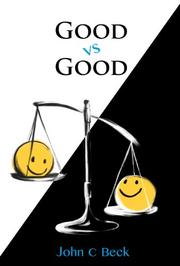 A business management expert explains that disagreements and conflicts are not the products of good versus evil but of differences in how individuals prioritize what he calls the Eight Great Goods.

After conducting thousands of interviews and surveys with people from more than 20 cultures, Beck (co-author: Japan’s Business Renaissance, 2005, etc.) determined that making decisions is, for most people, an attempt to do the right thing or to do good. The decisions people make, Beck says, can be sorted into one of the Eight Great Goods, each illustrated here with interview snippets: Life, Growth, Relationships, Joy, Individuality, Stability, Equality and Belief. Individuals prioritize these goods differently, with great variation; Beck notes that, according to his research, less than 10 percent of a representative sample of Americans shares a pattern of priority with another person. Regardless of this individual variation, Beck cogently and effectively proposes that by using these eight goods to categorize even the most contentious debates, opponents will discover commonalities. Perhaps more importantly, opponents will stop viewing debated issues in terms of good versus evil and instead understand conflicts as a matter of good versus good. Once an individual organizes the eight goods according to his or her own priorities, Beck says decision-making can be accomplished by applying a simple algorithm to the problem at hand. At the organizational and national levels, where individual lists would, he presumes, vary significantly, problems are analyzed based on which goods are most applicable. Using the debate over Arizona’s immigration law as an example, Beck illustrates this process by bringing a contentious group of debaters closer to agreement by identifying the goods of Relationships, Equality, Stability and Individuality—the goods most affected by the law’s passage, he says. Further evidence of how these eight goods factor into decision-making is described in Section III, which examines various nations and the policies that reflect how different countries have prioritized these goods. The book concludes with a section on how leaders can put the Eight Great Goods into practice and develop better, more focused and successful organizations. Due to Beck’s conversational writing style, the concepts are made easy to understand without becoming too simplistic. Rather than offering a tired analysis of the current trend toward deep polarization, he offers plausible, practicable steps toward a solution that require little more than a fresh perspective and a willingness to try something new.

An eye-opening, even-keeled theory offering hope to those who disagree.

GOOD VS. GOOD: WHY THE 8 GREAT GOODS ARE BEHIND EVERY GOOD (AND BAD) DECISION: Kirkus Star

GOOD VS. GOOD: WHY THE 8 GREAT GOODS ARE BEHIND EVERY GOOD (AND BAD) DECISION: Named to <i>Kirkus Reviews'</i> Best Books, 2013

The Kids are Alright