John Wirenius is a graduate of Fordham and Columbia Universities. Outside of writing fiction, he is a labor lawyer, a deacon in the Episcopal Church, and a published scholar who has written on subjects ranging from the First Amendment, the role of canon law in the Catholic Church sex abuse crisis, to law and religion. He and his wife Catherine Isobe divide their time between Brooklyn and Albany.

As a deacon, John seeks ways to resolve differences and reconcile conflicts. As a scholar, he seeks to illuminate the history of law and religion, and to trace the effect of seemingly outworn doctrines into the present. His fiction engages with some of the same concerns, though it is fundamentally rooted in character and story. Still, his fiction is based on careful research into the times and places he depicts, and is rooted in the realities of those times and places.

John’s love of the novels of Anthony Trollope led him to continue the story of the marriage of two outsiders—Phineas Finn, a Catholic Irishman in Protestant England, and Marie Finn, the former Madame Max Goesler, a Jewish widow from Vienna—and their expanding social circle.

“The author has a profound knowledge of how Trollope writes—from the way he borrows characters from other authors to his tendency to keep the “dates of his novels vague.”.... Wirenius’ thoroughly plausible tale can be read as a stand-alone novel. Fans of Trollope will surely delight in reuniting with their old favorite Finn, even if it is to form their own conclusions on how he compares to the master’s original rendering. An expert and gracefully executed follow-up to Trollope’s Palliser series.”
– Kirkus Reviews 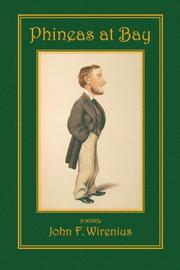 A political novel presents a detailed reinvigoration of a beloved Trollope-an character.

Phineas Finn is the eponymous hero of two novels in Anthony Trollope’s Palliser series, a political epic set in the 19th century. In the first book, the personable and dashing young Irishman heads to Victorian London to train as a lawyer and inveigles his way into high society. By the close of the second volume, Finn is weary after unsuccessfully standing for Parliament and enduring a grueling murder trial. Wirenius’ (First Amendment, First Principles, 2000) offering picks up the story in the 1890s, two decades after Trollope brought Finn’s tale to a close. Finn is appointed as counsel for Ifor Powlett-Jones, a Welsh miner charged with, among other things, criminal mischief, rioting, and assault after striking his foreman during a fracas following an explosion in a mine. The case becomes of further interest to the hero when he realizes that the mine is owned by William McScuttle, a significant figure in the Liberal Party, of which Finn himself is a member. In terms of his political standing, Finn appears to be disillusioned and drifting, looked on by members of his own party as an outsider. Wirenius captures a moment in a rapidly evolving political world as Finn becomes increasingly involved with the newly established Labour Party. The hero’s shifting sensibilities form only part of an intricately embroidered narrative that describes the social machinations—including the dangerous liaisons—that provide a backdrop to the political scene. At one point in the story, Finn even finds “himself dragged into a duel.” Trollope’s political novels were fueled by his skillful use of detailed characterization to create a realistic social world animated by a large cast of individually distinguishable personalities. In this intriguing tale, Wirenius displays similarly acute powers of observation. This is exemplified by his elegant description of the social standing of a prominent socialist: “The Right Honourable John Oswald Theobald Phineas Standish—Lord Chiltern, in Society—was in a position that would have excited the disapprobation of his relatives and friends, knew it, and, flushed with emotion, did not care.” The author adopts an appropriately clipped evaluative tenor—which was employed by Trollope—to strip the character to his essence in the space of a sentence. Such is Wirenius’ stylistic understanding of Trollope that it is entirely possible to finish reading the 19th-century Phineas Redux and begin the contemporary elaboration in smooth transition. This is in no small part due to Wirenius’ depth of research, which he discusses in his afterword. The author has a profound knowledge of how Trollope writes—from the way he borrows characters from other authors to his tendency to keep the “dates of his novels vague.” Readers not up to speed with the Palliser series would benefit from perusing Trollope, although Wirenius’ thoroughly plausible tale can be read as a stand-alone novel. Fans of Trollope will surely delight in reuniting with their old favorite Finn, even if it is to form their own conclusions on how he compares to the master’s original rendering.

An expert and gracefully executed follow-up to Trollope’s Palliser series.

In First Amendment, First Principles, attorney John F. Wirenius explores challenges to freedom of speech and examines the evolution of how the First Amendment has come to the meaning it bears today. In his bold rethinking of the concept of freedom of speech, Wirenius writes a thorough, scholarly discussion of the body of law surrounding free speech and a passionate defense of his convictions regarding the First Amendment. He reminds us that we must protect the First Amendment in order for it to protect us. "[A] thoroughly researched and persuasive argument for the defense of free speech. "—New York Law Journal "In a work equally suitable for academics, lawyers, and lay persons, attorney Wirenius reminds us of the importance of the First Amendment and the significance of the numerous attacks against it at the beginning of the 21st century. Case and subject indexes are especially helpful .... Recommended at all levels."—Choice "Demonstrates how the First Amendment has radically transformed traditional American social systems, eliminated or reduced old-fashioned prejudice and hatreds, and promoted both equality and freedom together."—Jurist

The Taylor Law at 50: Public Sector Labor Relations in a Changing Landscape

Wirenius edited and contributed several chapters to this collection of essays by academics and practitioners about the state of American public sector labor law, with a special focus on New York State’s Taylor Law.
ISBN: 978-1-57969-551-4