John H. Matthews' work has appeared in anthologies and several literary magazines. He lives near Chicago with his wife and their American bulldog. This is where he writes, plays bass guitar and goes fishing whenever possible. 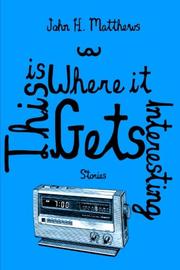 This Is Where It Gets Interesting

Matthews presents the best of his short-form work in a debut collection that is as funny and witty as it is scary and menacing. Nearly all of the stories have a fantastical bent, and each contains an ending successfully surprising or unexpectedly poignant. Several common themes appear—death, government and authority, smoking—giving the collection a cohesive, complete feel. In “The Black Tornado,” a man’s deceased father visits him in the form of a tornado; the dead convene at a bowling alley for a meet and greet in “Johnny Heart Attack”; and “Ghostlike” follows a spirit who leaves notes in a shopping mall. Elsewhere in the collection, an authoritarian regime takes over a retirement community and builds a wall. In “Government Psychic,” a government-hired psychic works at the DMV, and “Bullets Have No Effect” features a criminal who receives a lethal injection but just won’t die. The straightforward, short sentences can grow tiresomely simple, as in “To Tell About It,” when a reporter who interviews people about near-death experiences explains his job saying, “I put out ads. I talk to people. I talk to people who know people. I meet for coffee, for dinner, over beers. I bring my voice recorder. I ask people how they almost died, and they tell me,” but the author succeeds at telling tales that pack either a salient message or uproarious punch line (sometimes both). Matthews’ collection is ideal for those who are able to willingly suspend disbelief and enter a world that is quirky, ugly and uproariously entertaining. It’s also a good choice for those who like their musings on mortality served with black humor and irony.

An eccentric collection of fantastical, funny and puzzling tales.

“Art is a job. It’s just not a sucky job. It’s important and it’s valuable to the community. You should get paid for what you do. I’m really sick of the whole idea that art is this lazy thing that slackers do.” — Kathleen Hanna

This Is Where It Gets Interesting