John Mazur graduated from Montana University with a Masters in 19th Century German Theatre and English Literature, but his real background started in Chicago, born to a second generation Polish meat packer and a German mother who played piano in the Park districts of Chicago. His heart was captured by Montana and the breathtaking beauty and grounded people he met there. Both Montana and Chicago have influenced his writing. His desire to bring back the liberal arts to society along with its soul changing influence is evident in his writing. His careers have spanned from teaching at the University level to Principal on the Blackfeet Indian Reservation. Training under a Master Sausage maker from Warsaw Poland to running two separate sausage plants. For years his teachers and friends had told him to write; after a tragedy in 2003 he started his first major book, completed but as of now unpublished. "He Said, She Said" is John's first book released for publication; a second will follow early 2020. In his writing he invests time and energy into his characters and the vision of their relationships as the stories unfold for the reader to enjoy. 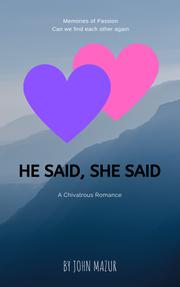 HE SAID, SHE SAID

BY John Mazur • POSTED ON

In this debut novel, a college professor and his former student conduct a slow romance fueled by his poetry.

After a present-day prefatory first chapter, the novel—told in alternating first-person narrations—turns back 10 years to the fateful meeting in Flagstaff, Arizona, of Peter DuBois, 30, and his English 201 student, Elaine Emerson, 20. He’s immediately drawn to her vibrancy and blue eyes and they begin talking after class. Both appreciate Jane Austen’s refined sensibility; both adore the movie Shakespeare in Love. Though they find each other alluring, she intends to stay a virgin until marriage, and Peter wants her to be “unencumbered.” They settle into a tender but platonic relationship, “a magnetic confluence of two souls now merged to one,” sometimes so deep that they can hear each other’s thoughts. They share snuggles and kisses on romantic get-togethers; Peter writes her love poetry; he asks her to marry him. Elaine agrees, but not yet: “I so want to enjoy us now while we’re as free and wild as summer’s soft rambling winds.” But the strains of school and work, and the imagined difficulties of marriage (“Two children? Good-bye medical career”), separate them. At 30, Elaine is ready to date—but no man compares to Peter. Can the stars align for them at last? In his debut novel, Mazur presents two people so given to high-flown rhapsody that they, and their relationship, rarely seem convincing. A six-month separation, for example, is described as “losing each other for eons in another dimension.” Dialogue is often lecture-y: “To love the beautiful within, Elaine, is to seek love of soul, that which cannot be seen and is immortal.” At the same time, attitudes about the body are often giggly and unsophisticated, with frequent mentions of going “commando.” The book is given to risibly overpraising Peter, whether for his poetry (“absolutely astonishing”) or his bratwurst: “That he was a master sausage maker was quite surprising….Where did one get the time for all this accomplishment?”