John Monaghan is a retired Captain of the New York City Police Department and a graduate of Harvard University. During his time with the NYPD, he dealt with matters of extreme violence. He came to know New York City very well, downtown, uptown, and places not normally frequented by respectable people. He is a native of New York City and currently living in a nearby suburb with his wife and their three children . He is a skilled writer who used that skill internally in police matters and is now using it to write novels based upon the exploits of NYPD Captain Jimmy Gallagher. Head on is the first of three novels he has written for History Publishing Global.

“…a steady pace throughout, including the frequent dialogue exchanges, while Jimmy turns into the kind of protagonist who can easily carry his own series. Dynamic characters—good and bad guys alike—beef up this action-laden tale.”
– Kirkus Reviews 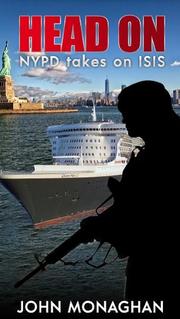 An NYPD cop heading a counterterrorism unit tries to stop a sleeper cell in the U.S. from launching a strike in this debut thriller.

Capt. Jimmy Gallagher’s first case as commander of the Organized Crime Terrorist Unit is a homicide in Brooklyn. The victim “appears to be” Middle Eastern, and the unusual method of strangulation—leaving a hole in the neck—is reminiscent of al-Qaida’s M.O. for dispatching its own. Tracking the victim via security footage ultimately leads to a gunfight involving a man later identified as a known terrorist on the FBI’s watch list. Authorities not only suspect a domestic terror cell, but a potential link to Russians as well. Indeed, readers know that a group has been prepping suicide bombers strapped with vests of C-4. Jimmy, meanwhile, faces opposition from Department Chief Jim Gates, who was a rival of the captain’s former cop/private investigator father and is currently the mayor’s longtime friend. Furthermore, Gates established the OCTU six months earlier and doesn’t like that the police commissioner took the largely ineffective unit away from him. The chief’s connections could place Jimmy’s career in jeopardy, but that doesn’t stop him from putting his life on the line to ensure the terrorists don’t fulfill their explosive intentions. While Monaghan’s novel has its share of action, most of it is reserved for the final act, with the preceding pages rife with character development. The story offers absorbing exposition, particularly in its concentration on the villains: meticulous details on the methodical construction of explosives and more specifically on a man named Ibrahim, who may be second-guessing his participation in a terrorist attack. At the same time, Jimmy’s curious back story entails accidentally killing his partner in a shootout and dating department psychologist Dr. Jessica Shore. Unfortunately, neither incident has much impact on the main plot, even Jimmy and Jessica’s eventual romance. Nevertheless, there’s a steady pace throughout, including the frequent dialogue exchanges, while Jimmy turns into the kind of protagonist who can easily carry his own series.