John Rickett
Having trained as a doctor first at Cambridge University and then at London’s Guys Hospital John specialized in general surgery in a busy district general hospital in Torbay, South Devon. During his working life he was always interested in outcomes and efficiency and pioneered a system of audit looking at his results at the time when such were not otherwise available. Subsequently a system was set up to embrace all specialties and this is now considered a standard part of the work of every unit. Again, ahead of other units, he set up a local database to look at and screen for family cancer within his own specialty, colon surgery.

He wrote professional medical articles during his working life, always preferring the practical elements of his work rather than the politics which he left to others.

Since retirement he researched his father’s diaries from 1940/41. He realized he was in a unique position to comment on the medicine of those times, prior to the NHS and before penicillin and antibiotics. They provide an archive of family medicine at that crucial time of the war. In the second part of Stretchers Not available his father set up and ran a hospital unit, behind enemy lines, from scratch. When telegraphing urgently for stretchers he got the reply “Stretchers not – repeat not available – to what use would they be put?” The base support was seriously lacking and they were inundated with both Commando and Americans wounded.

Since retirement he has worked on protecting the endangered butterflies of Devon by reporting sightings to the national data collecting service. Having gone seriously hard of hearing he now works for the charity Action on Hearing Loss and has set up a website to help with information beyond the hearing aid.


“Together, Rickett's commentary and his son's light touch chronicle the intricacies of' man's wartime condition, at which official records and most battle accounts only hint.”
– Kirkus Reviews 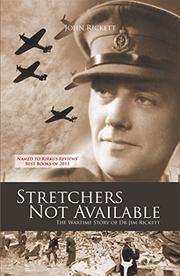 Rickett, in his nonfiction debut, astutely backs out of the way, letting his father’s journals of wartime doctoring—and life, as it happened between the emergencies—carry the day.

Like any good physician, Dr. Jim Rickett paid close attention to the mental and emotional well-being of those around him. He often recorded those details in diary entries and letters to his wife, Dorothy. His remembrances dance from observations of human perseverance to the classic British stiff upper lip: “[T]his morning there was some more machine gunning, but I was safely tucked away having a bath.” Such baths were left behind, though, when Rickett was pulled from his community practice to scratch a field hospital out of nothing on the tiny isle of Vis off the coast of Italy and Yugoslavia, piecing commandos back together as they returned from raids on German-controlled islands in the Adriatic Sea. He was soon revealed to be a man in his element, bartering boots for supplies and, when operating, balancing the need for light against the strict requirements of a wartime blackout. His world was a time and place where, out of necessity, blood for transfusions could be stored in old wine bottles. The younger Rickett steps in only occasionally, deftly footnoting medical terms or establishing historical context. World War II neophytes won’t be left to drift, and war buffs will still appreciate this graceful, intelligent account from a man who unexpectedly found himself directly, intimately besieged on the front lines.

Together, Rickett’s commentary and his son’s light touch chronicle the intricacies of man’s wartime condition, at which official records and most battle accounts only hint.