John Wemlinger is a retired U.S. Army Colonel and served 27 years on active duty in positions of ever-increasing responsibility around the world. A Vietnam veteran, he logged nearly 1,000 combat flying hours. Nearly half of his time in the Army was spent in various command positions including command of military ports at Cape Canaveral, Florida and Okinawa, Japan. His final command tour was as the commander, Military Traffic Management Command, Pacific (Now the 599th Transportation Brigade) where he was in charge of military ports in the Pacific rim from Pusan, South Korea to Auckland, New Zealand.

Following his retirement he worked in public education serving as an administrator in several alternative high schools serving at-risk students who had failed to achieve success in the traditional high school environment. In 2012, he retired in order to pursue his passion for writing and has since published three novels, "Winter's Bloom" (2016-Mission Point Press); "Operation Light Switch" (2017-Mission Point Press); and "Before the Snow Flies" (2019-Mission Point Press). "Winter's Bloom" was a regional best-selling paperback; "Operation Light Switch" was a finalist in the Foreword Reviews Book of the Year Award; and "Before the Snow Flies" placed third in the Colorado Independent Publishers' Association's Annual EVVY Awards and is a nominee as a Michigan Notable Read for 2019.

A sought-after speaker, Wemlinger readily relates his military and other life experiences to the major themes in the down-to-earth novels that he writes.

He holds a Bachelor of Science in Education from The Ohio State University (1968); a Masters of Science from St. John's University in New York City (1983); and a Masters of Arts from the U.S. Naval War College (1993). He is a senior Army aviator. His military decorations include the Defense Distinguished Service Medal; the Legion of Merit; the Bronze Star; two awards of the Defense Meritorious Service Medal; four awards of the Army Meritorious Service Medal; and four awards of the Army Commendation Medal. He was recently named to Who's Who in America for his leadership in both the military and civilian sectors.

“Wemlinger knows how to plot a novel and pace it well. And his characters grip us.”
– Kirkus Reviews 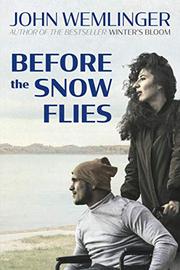 BEFORE THE SNOW FLIES

In novelist Wemlinger’s (Operation Light Switch, 2017, etc.) tale for our times, a soldier loses his legs.

Maj. David Keller’s promising career comes to an abrupt end when an IED blows off his legs, with not even enough left to make prosthetics possible. Physically his chances of recovery are good, but he is as depressed and suicidal as one would expect. And adrift. When he left Onekama, Michigan, for West Point there was bad blood, mostly between him and his dad. So he soon cut all ties with his family and his hometown, including with his high school sweetheart, Maggie Lassiter. When we meet Maggie, she is married to Ray McCall, a real brute. Their divorce only enrages Ray further. He will get her back, and any suspected rivals will feel his righteous wrath. Meanwhile, the whole town pulls together to welcome David home. Reluctantly, he goes along with this; however, secretly he is still plotting his suicide. But he needs to make amends with his dad, now slipping into dementia, and of course there is still a spark for Maggie. The turning point comes when Ray tries to kill him. Instead, he kills Ray with the same pistol that he’d bought to do himself in. He faces trial, which may end with a promising future with Maggie. Wemlinger knows how to plot a novel and pace it well. And his characters grip us. There is PJ who loves his big brother and has now reversed the roles, taking care of David. Ray McCall is a truly bad dude, so easy to hate. Emily, Maggie’s girlfriend, is the sidekick we all recognize. Trial scenes are always grabbers, and Wemlinger does not disappoint (he also has lot of fun with the pompous lawyer Myles Wingate).

A well-cast, effective portrayal of a small town rallying for its own.

Cleveland Spires, a respected and highly decorated soldier, lost his career, his family, and much of his pride when he was sent to prison for a crime he did not commit. Now he's out, and after returning to his hometown, he stumbles onto a clue that might prove his innocence. That clue leads him to Bangkok, Thailand, where he finds himself thrust into the middle of an international conspiracy that will rock the global economy. What he does next will take all of his courage and an unflinching faith in a system that once failed him.
Published: May 1, 2017
ISBN: 9781943995332

For over three decades, Rock Graham has carried the physical and emotional scars from a tour in Vietnam. He is a decorated war hero, but guilt from what happened one dark night in a steaming southeast Asia Jungle is always lying in ambush, waiting for an unguarded moment to set his demons free. When he tries to find solitude at a cottage on Lake Michigan in the dead of winter, a chance encounter on the desolate, frozen shoreline changes his life forever. "Winter's Bloom" is a poignant tale of loss, love and redemption that will keep you turning the pages.
Published: May 1, 2016
ISBN: 9781943995066