- Johnny M. Sanchez lives in San Diego with his wife and three children. Johnny works for the NAVY as a contractor specializing in Flight Deck Anti Slip Coatings which is a safety feature for all military vessels. Johnny and his family attend Eastlake Community Church near their home. Johnny enjoys barbeques and spending time with his family. Johnny has an infatuation with the written word which led him to writing.

“Sanchez develops his characters through humorous, astute dialogue and situations, and his writing shines when describing Joey’s and Brooke’s first meeting.”
– Kirkus Reviews 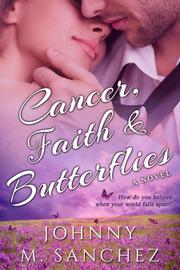 Joey lost both parents in a tragic accident. Now he faces losing the love of his life, Brooke, to breast cancer. Shuffling between the hospital, his home, and work, he reminisces about happier times and wonders how Brooke can maintain her faith in God. His doubt is echoed by Jim Anderson, whose preteen son Jimmy fights cancer in the hospital room next door. Jimmy and Brooke die on the same day, and Joey is left to raise his 8-month-old daughter, Sara, with the help of his sister, Carroll. Like Brooke, Carroll is a Christian. Before Brooke’s funeral, Joey yells at God and accidentally rousts a homeless man, Billy Jones, squatting on the church steps. Billy reveals that Brooke had been kind to him, giving him food and attending services with him over the objections of congregants. Billy also exhorts Joey to find strength in his faith, but the protagonist feels that everywhere he turns he encounters Christians but never God or any real answers. When a lump is discovered below his daughter’s left shoulder, Joey becomes frightened: Brooke had been diagnosed with cancer while pregnant with Sara. A biopsy reveals a malignant tumor, and Joey lashes out at those he loves and recklessly confronts an enemy. Sanchez develops his characters through humorous, astute dialogue and situations, and his writing shines when describing Joey’s and Brooke’s first meeting and Joey’s mentor-friendship with Jimmy. At one point, Joey takes the boy for a ride in his red Chevy (“He looked free as a bird just sitting there with his eyes closed and a smile on his face. It was like all the months in the hospital, the chemo, the pain, had all just melted away…No words were spoken, just the wind in our hair and the hum of the engine”). Joey’s agony over Brooke’s death and his questions about God in the face of it are handled deftly and delicately, but later, the novel spirals into melodrama and propaganda. A convenient set of “coincidences” finally convinces Joey of God’s existence, but his earlier questions remain unanswered. Furthermore, a key scene, in which the police release Joey after only a brief interrogation when he assaults a man, and a natural event that “scientists can’t explain” lack credibility.

A promising tale with quirky characters and fresh insights, marred by a predictable deus ex machina.

The Count of Monte Cristo