• Bad Juju & Other Tales of Madness and Mayhem, which won a Spinetingler Award for best crime story collection and was a featured book at the Texas Book Festival. New York Magazine called it: “Hallucinatory, hilarious imaginative noir.”

• A Death in Mexico, about which Booklist said: “this uncompromising look at racial tensions in a small Mexican town perfectly reflects the mood of border noir…the novel takes us deep into a world of darkness, capturing that same blend of bleakness and all-consuming corruption that drives Orson Welles’ classic film Touch of Evil.”

• Phone Call from Hell and Other Tales of the Damned, anointed by ForeWord Reviews as “a masterpiece of noir fiction—organized insanity at its best…wickedly humorous.” Includes the story “Swingers Anonymous,” made into the short crime film of the same title featured at the 2015 Cannes Film Festival. Written and produced by Jonathan Woods, directed by Quincy Perkins.

• Kiss the Devil Goodnight, a road trip crime novel about which Booklist wrote: “This is the literary equivalent of a Big Daddy Roth drawing: all bulging eyeballs, lolling tongues, and high octane propulsion. Like Hunter S. Thompson crossbred with Gil Brewer, Woods revels in paranoia, hallucinations, hapless saps, and language both playful and profane. Exuberantly shotgunning pulp-fiction clichés (from Mexican sojourns to Nazi scientists), he slathers on film noir homage and shakes until it explodes like the radioactive suitcase at the end of [the classic film noir] Kiss Me Deadly.”—Keir Graff, Booklist 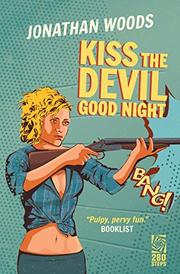 In Woods’ (Phone Call From Hell And Other Tales of the Damned, 2014, etc.) noirish tale, a just-paroled convict goes after two women whose double cross led to his imprisonment.

When the recession forces Atlanta-based war veteran Bill Derringer into a 14-week furlough from his job as a waste-management truck driver, he and his wife, Edie, find themselves short on both cash and entertainment. She suggests a trip to Orlando, Florida, to see a murder trial, so they pack up their clothes and their two kids and head south. They crash at Edie’s cousin Ida’s place, but it isn’t long before the unemployed “Aunt Ida,” as she’s called, proposes robbing a local guns-and-ammo show. Derringer is surprised to learn that Edie and Aunt Ida have been lovers since high school, and after the robbery, he finds out that Aunt Ida’s plan to escape to Mexico City with the loot doesn’t include him. He winds up in prison for the heist, while the two women vanish. Five-and-a-half years later, he reports to a Miami halfway house, initially invested in finding his estranged children. But he soon makes tracks for Mexico City. Along the way, he becomes a courier for a mysterious suitcase that once belonged to Beat Generation writer William S. Burroughs, and even agrees to infiltrate a drug cartel for an unspecified U.S. agency—but his true goal is revenge. Woods’ story has several pulp-fiction trademarks, including a slew of seedy characters and plenty of sex and violence. But the book isn’t as hard-boiled as readers may anticipate. For every brazen simile (“The afternoon sun beat down like a dominatrix in a sweat”), narrator Derringer drops a line that’s endearing or sentimental, as when he recalls when he and Edie “smooched and groped each other like movie matinee lovers.” Although the perpetually gruff protagonist is a hard man to like, he enjoyably teams up with fellow halfway house resident Jane Ryder, who’s equally cynical but also whip-smart and reliable. A gleefully convoluted final act includes Nazis, unexpected deaths, and an over-the-top villainous plot.

The Long Goodbye; A Flag for Sunrise; Wild at Heart; The Two Faces of January; A Rage in Harlem

A Death in Mexico

A voluptuous artists’ model is murdered, her mutilated body dumped in the central plaza of the colonial Mexican town of San Miguel de Allende. Inspector Hector Diaz’s murder investigation takes him deep into San Miguel’s gringo expat colony, the corruption of modern Mexico by greed and drugs, and the quirky byways and dead ends of love. Corporal Felicia Goya, a tough cookie, ably assists Diaz in his search for the killer. When ancient Aztec gods or their hallucinations appear to Diaz, he considers the legacy of Mexico’s bloodstained past as a blueprint for justice in the present. Recalling Michael Chabon’s The Yiddish Policemen’s Union in its mastery of metaphor, wit, moody atmosphere and sense of place, A Death in Mexico is a gritty and gripping quest for revenge and redemption.
Published: June 15, 2012
ISBN: 978-0982843680

Bad Juju & Other Tales of Madness and Mayhem

Running a scam in a two-bit Caribbean republic, a tough-as-nails gun moll has to outrun both a murder rap and the local neo-Nazi commandant. A jealous archaeologist uses a Mayan stone dildo to bludgeon to death the chairman of the Archaeology Department. An accountant goes on a tropical vacation to a place where everything is falling apart, including his own sketchy soul. Seduced by an escaped psychopath named Dandelion, a frat boy has no choice but to commit murder. The nineteen opium dreams that make up Bad Juju provide the most outrageous, entertaining and over-the-top crime spree since Quentin Tarantino appeared on the scene.
Published: May 15, 2010
ISBN: 978-0981557977

Phone Call from Hell and Other Tales of the Damned

Jonathan Woods, author of the award-winning Bad Juju & Other Tales of Madness and Mayhem, returns with a new collection of seventeen crazed and corrosively funny noir tales. Combining the offbeat humor of the Coen brothers with the madness of Jim Thompson, these stories will keep you up ’til the wee hours. And you won’t go to sleep without a loaded pistol under your pillow.
Published: July 15, 2014
ISBN: 978-0989932318