Joni Marie Iraci is a Registered Nurse who raised three children before returning to college in her late fifties to pursue a life-long dream of becoming a writer. She earned a bachelor’s degree in liberal studies with a concentration in writing and literature from Sarah Lawrence College before earning an MFA in creative writing from Columbia University at the age of 66. “Distractions” and other short stories can be found in the online literary journals: ReviewAmericana.com and BeneaththeRainbow.com as well as The Grief Diaries.com. “Reinventing Jenna Rose was published in May 2019 by Fat Dog Books Inc. and is available on Amazon.com. She is working on her second novel and a collection of short stories. She teaches creative writing to adults at The New Dawn Foundation in New Rochelle, N.Y. She lives in Westchester County, N.Y with her husband, a diva cat, 2 dogs, and 4 lovable strays. Her website is JoniMarieIraci.com

“Iraci’s sharply written tale incisively tackles the subject of child abuse. Such abuse has clearly affected Jenna deeply, as she’s now prone to what appear to be severe panic attacks. The teenager aptly states in her narration that Alan “raped” her childhood and stole from her “a normal child’s life.” As might be expected, the book’s tone is often grim, as the protagonist endures not only her considerable trauma, but also a largely neglectful mother and terrible classmates. But Jenna’s allies help to alleviate the bleakness of the narrative.”
– Kirkus Reviews 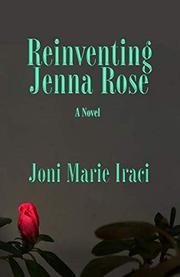 In Iraci’s debut novel, a Californian teenager tries to escape her traumatic childhood by tracking down her grandmother in New York City.

Jenna Rose’s mother, Meghan, leaves her 17-year-old daughter home alone while she’s away on business. This certainly isn’t an uncommon occurrence, so the teenager is unconcerned—until she learns that her estranged father, Alan, whom Meghan divorced four months earlier, will be stopping by during Meghan’s absence. Jenna doesn’t want to see him, so she concocts a plan that will allow her to avoid him: She’ll visit her maternal grandmother, Katherine O’Connor, whose existence Jenna only recently discovered; Meghan had previously told her that all of her other relatives were dead. Using her mom’s shiny new platinum credit card, Jenna books a flight to New York and shows up at Katherine’s door. The older woman, whom Jenna eventually dubs “Grand,” willingly takes her in. The teen slowly adjusts to her new life in the city, which entails attending private school with snarky classmates, including the rather contemptible Nicole Elliott. However, Jenna also makes her first real friend: Gabrielle Yvonne “Gypsy” Puteri, an uninhibited but good-natured professional model. Grand knows that there’s something harrowing in Jenna’s past, and it’s unquestionably related to Alan—a photographer whom cops later arrest on serious and disturbing charges. Jenna opens up to Grand and therapist Christine Gautier about her childhood trauma, and struggles with her impending testimony at a trial in open court. Iraci’s sharply written tale incisively tackles the subject of child abuse. Such abuse has clearly affected Jenna deeply, as she’s now prone to what appear to be severe panic attacks. The teenager aptly states in her narration that Alan “raped” her childhood and stole from her “a normal child’s life.” As might be expected, the book’s tone is often grim, as the protagonist endures not only her considerable trauma, but also a largely neglectful mother and terrible classmates. But Jenna’s allies help to alleviate the bleakness of the narrative. Grand, for example, keeps Meghan and Alan away from Jenna long before she knows the full details of her granddaughter’s secret. The teenager also receives a good deal of emotional support from Gypsy and Jenna’s loyal German shepherd, Gracie. Jenna herself offers some occasional moments of humor, as when a nurse asks her if she wants to sign an organ donor card, and she wearily responds, “Sure, take whatever you want.” Iraci’s portrayal of the wealthy feels somewhat inconsistent; Jenna’s affluent schoolmates are depicted as spoiled, but it’s also noted that sympathetic Grand’s estranged siblings disapproved of her and her late husband’s riches. Jenna, however, is a steady character who retains certain traits even as her character evolves, such as her general wariness of most people. The story takes readers through Alan’s trial and Jenna’s unnerving time on the stand; a memorable final act shows an older Jenna who, despite a loss or two, finds resolution.

An astute, respectful treatment of a serious issue, featuring a strong protagonist.

Slave poet Phillis Wheatley comes to life in this fictionalized stream of consciousness in diary format.

When a writer goes to Italy in search of a muse, she gets more than she bargained for.

A young woman reminices about the abuse she suffered at the hands of her mother.

An unpublished author is distracted while reading her 111th rejection email, is killed by an Uber driver; she finds herself in the presence of St. Peter's agent who requests a query letter detailing her time spent on earth. From the afterlife she observes life going on without her as her absentee sister materializes, finds her novel and publishes it as her own.

The illegitimate daughter of the first American Pope is kidnapped as a baby by the church hierarchy and sequestered in the Vatican. When her mother recovers from the injuries she'd sustained at the hands of the hired kidnapper, she travels from Venice to Rome to regain custody of her daughter. Set in Italy, this work in progress novel is infused with the flavors of Italy as the story unfolds and brings to light little known historical scandals centered around the Catholic Church.