Joseph C. Reiss is the pen name of Joseph Williams. Mr. Reiss grew up in New Jersey, went to college at Syracuse University, and somehow graduated in four years. Then he went down South for even more college, getting a graduate degree in Human Resource Development from Clemson University.

Mr. Reiss makes his living as an instructional designer--a relatively still unknown niche hybrid of technical writing, graphic design, and interactive web programming. Name a profession; Mr. Reiss has likely developed a training program for the people in that industry. He has worked with subject matter experts in the fields of finance, chemical engineering, airline operations, physical therapy, technology, and bullying prevention.

The title "The Incendiary Agent" is a reference to white phosphorous, the highly flammable substance that ignites immediately when exposed to atmospheric oxygen. It can therefore only be stored safely by submerging it completely in water.

Mr. Reiss's main hypothesis for "The Incendiary Agent" is that, after 9/11, the US government is taking uncharted steps in national security policy. The actors taking these steps are doing so in ways that we cannot see, and therefore don't know about. They operate below the water's surface, where the incendiary nature of their actions are rendered inert...for now. 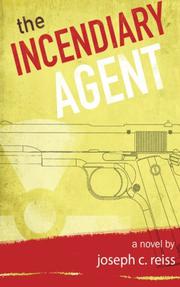 In Reiss’ debut thriller, CIA surveillance leads agents to a counterfeiting sting, which may be the precursor to a full-scale terrorist assault.
Nathan Frost funds the New York University scholarship program to aid visiting Israeli and Arab students. But the program’s true purpose is to allow Frost to monitor for his CIA superiors the student applicants selected for having suspicious backgrounds and, thus, likelihoods of being or becoming intelligence sources. He hits pay dirt when one turns out to be a Mossad agent with an interest in another applicant, who might be a terrorist. The latter’s cellphone, which has three numbers in its call history, directs Frost to a Secret Service counterfeiting operation with ties to the Russian mob. While this doesn’t explain the presence of an Islamic terrorist in the U.S., the third contact on the cellphone might, and Frost and fellow CIA agents Diana Calabrese and Kerwin Chan must uncover a potential attack that’s more sinister and decidedly more lethal than counterfeit currency. Despite the plot’s inclusion of a seemingly endless array of characters from various agencies—there are even more countries with agents in the mix—the novel never feels convoluted or confusing. Reiss manages this by simplifying certain details; for instance, Frost’s boss is named (and is nothing more than) “The Man on the Phone.” The story excels at detailing espionage; Frost is an exceptional spy, stealthily bugging people with video and/or audio devices and employing more traditional methods, such as shadowing a Russian gangster to a subway train. But there are also quite a few solid action scenes, and Frost is more than prepared for any situation; he has an amusingly excessive arsenal of weapons stashed in a locker, which leaves Diana in awe; “I have one gun,” she counters. The book is occasionally violent, but a torture scene, with surprisingly muted intensity, has the most impact and will have many readers squirming. The majority of the story’s questions are sufficiently resolved before it’s over, and a coda teases a sequel. Oddly, though this is the first novel to feature Frost and Diana, there’s an impression that another story preceded it; the couple’s flirtatious relationship is already established by their first scene together, and the manner in which Frost financed his program, with help from Diana, is hinted at in a newspaper article at the beginning and only partly explained later. That could have been a story all its own.
A deliciously elaborate story, with spies, guns and intrigue in liberal doses.

The End of the Night

Family. Work. And then, in the time that is left, creating something.