Judith Austin Mills earned her M.A. in English at the University of Texas with a concentration in Creative Writing. Runner-up for the only graduate fellowship at the time, she also enjoyed the First Place fiction spot in Analecta. Stories from her collection have appeared in other literary journals.
Lately, the author’s fiction is set in early nineteenth-century Texas and Southern U.S. Her debut novel How Far Tomorrow (2011) and Those Bones at Goliad (fall, 2015) embrace less-known figures in the Texas Revolution and portray ordinary people transformed by that short war. A third novel in this setting percolates—featuring a Charleston prep-school youth who rushed to New Orleans to join the Georgia Battalion leaving for Texas, and the nearly forgotten revolution Tejano Juan Seguin.
A poet, as well as a fiction writer, Mills enjoyed a Pushcart nomination in 2015 for a selection from Accidental Joy: a streak of poetry. Tripping Home, set in the early 1970’s won First Place in a Texas competition for mainstream novel manuscripts.
An Austin Community College adjunct, Mills teaches occasionally and writes steadily. Her husband, mother, and sons’ families keep her grounded. Agents and publishers interested in fiction with the subtitle, “tales from a recent millennium,” are invited to contact the author through this site. The novels Tripping Home and Follow It Down, as well as the short story collection Lost Autumn Blues, await.

“In a demonstration of Mills' solid grasp of time and place, fictional characters mix with historical figures, from famous notables like Santa Anna and Stephen Austin to little known characters including Levi Weeks and Elizabeth Greenfield.”
– Kirkus Reviews 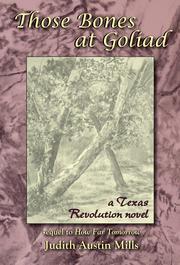 Those Bones at Goliad

A sweeping tale of 19th-century Texas.

In this historical novel, Mills (How Far Tomorrow, 2011) follows a large cast of characters from Georgia and Mississippi to Texas, where they find themselves caught in the revolution against Mexican rule and the short-lived Republic of Texas. Natchez, Mississippi, native Shelby Whitmire, who grows from a neglected youth to a veteran adventurer, is at the core of the narrative, surrounded by soldiers, settlers, innkeepers, and politicians as he travels from Mississippi to the Texas frontier. Navigating nearly fatal situations, he arrives in time for the battle of independence and eventually finds love and settles in his adopted homeland. In a demonstration of Mills’ solid grasp of time and place, fictional characters mix with historical figures, from famous notables like Santa Anna and Stephen Austin to little-known characters including Levi Weeks and Elizabeth Greenfield. Though the book excels in its depiction of heroism in history, it is less successful with subjects like slavery. While there is one prominent abolitionist character, most have few objections to the practice, including Shelby, who at one point equates his frustration over an unrequited crush to the expressions he observes at a slave auction: he “recognized, in the captive’s expression, his own mental state,” though eventually, the “men’s eyes met for a few moments, long enough for compassion and shame to stab at the individual with the freedom to walk away.” Native American characters enjoy a somewhat more nuanced portrayal, though many appear only to shoot arrows into Texan limbs. The writing, generally solid, does become awkward at times, particularly in the roughly two dozen places Mills identifies Shelby by his hometown instead of by name: “The man from Natchez gazed upon this landscape as if it were startlingly new, yet he sensed that the trees and rippling current looked much as they had in early autumn for the last two centuries.” Mills nevertheless keeps the plot moving, allowing the stories of ordinary Texans to outweigh the political rivalries and diplomatic rifts that fill the history books. She captures the effects of war on both soldiers and civilians, and the characters are plausible and engaging figures. 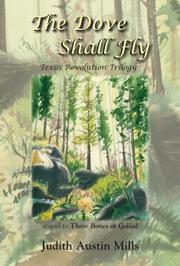 THE DOVE SHALL FLY

A sprawling novel focuses on the burgeoning revolution in 19th-century Texas.

In this final installment of her historical fiction trilogy, Mills (Those Bones at Goliad, 2015, etc.) returns to the world of 1830s Texas. After the American settler losses at the Alamo and Goliad, Yarico Harper, the free black woman who serves as the trilogy’s central protagonist, is fighting for survival and looking to ensure the safety of a dead traveling companion’s 13-year-old daughter, Adeline. Yarico and the white women she journeys with team up with Capt. Juan Seguin and the pro-independence Texan army in a group that also includes James Trezevant, a fellow immigrant from Georgia. The narrative moves in time from one chapter to the next, following the band in its fight for independence from Mexico and exploring Trezevant’s privileged youth and Yarico’s origins in newly independent Haiti. The tale concludes with the post-revolution disposition of the characters. Although readers of the previous volumes will have a more complete understanding of the multifaceted plot, newcomers should have no trouble following the story as both Texas and Yarico find their places in the evolving United States. The characters explore questions of Manifest Destiny and slavery as they contend with war and shifting alliances, keeping the narrative grounded in history while addressing topics relevant to contemporary readers. On the whole, the story is deftly written and well-researched, based firmly in the details of Texas history. The tale steeps readers in the setting without becoming engrossed in historical trivia. But there are numerous minor errors in the characters’ Spanish (“buenos tardes” instead of buenas tardes; “buenos noches” instead of buenas noches; “Téjano” instead of Tejano) as well as in the narrative itself (“plaintiff moans” instead of plaintive moans; “said her peace”). And Mills’ tendency to frequently label her characters (Yarico, for instance, is variously identified as “the dark-skinned woman,” “the woman who’d belonged with the Pagnols,” and “the woman in servant’s garb,” among other descriptions) can become grating. Despite these shortcomings, the book is a substantial piece of thoughtful historical fiction.

This solid final volume of a trilogy follows characters through Texas independence and beyond.

Austin area for the last half century; before that Houston; before that states up north...New York , New Jersey, Michigan...Massachusetts.

"History, and its near relative, Histrionics..." from Waterland by Graham Swift

I play Bach flute sonatas. I read the Harry Potter series in French

Observing the influence of the past in the present and the foreshadowing of today in yesterday.

Accidental Joy: a streak of poetry

In this sequence of poems, Judith Austin Mills considers the impact of the imagination on her own life and on the generation born into the last half of the twentieth century. These one hundred and one single-page poems--a poetic, interior monologue--shift from nostalgia to gratitude to social criticism and ultimately to a celebration of observant life.
Published: April 17, 2014
ISBN: 978-1-63210-001-6

When Sally Lane bolts from her boyfriend in the middle of the night, she doesn't guess the significance of life chapters about to be written. An adopted, only daughter of a Viet Nam era Air Force officer, she has more than one insecurity complex to overcome. She is an artist and musician, two vocations her father will never understand. But in a West Austin area near the university, her neighbors gradually become family, and commitment demands more of her than a fling ever did. She would certainly never have seen herself as a candidate for surrogate motherhood.

How Far Tomorrow: Remembering the Georgia Battalion in Texas

As recruits in Macon join a battalion headed for the Texas Revolution, a family of Georgia women needing protection go along. While most volunteers at Goliad are lost in the Palm Sunday executions, the Harper women survive the Runaway Scrape and live to see Austin become the capital. Clashes between the cause of liberty and the institution of slavery persist.
Published: Aug. 24, 2011
ISBN: 978-1-935514-96-1

In the award-winning title story, a young mother notices the season of changing leaves but needs time to recognize that her marriage is falling apart; In "Secrets of the Dogwatch Man," a mentally fragile man tries to save a life but is cheerfully ignored; in "Circle Whenever" a rural mother is dismissive of her children's affection without realizing how far they are withdrawing from her; in "For Elise," a neglected girl forms an attachment to an elderly woman and the child's future ticks up unexpectedly. (More stories about quiet, transformative shifts. These are "tales from a recent millennium;" individual selections have appeared in literary journals. )

This coming-of-age novel was chosen by Ken Atchity as First Place in the Writers League of Tx mainstream novel competition in 2001. (Fall of 2001 was probably not a favorable era for an irreverent, freewheeling tale of self-discovery.) In Tripping Home, Darlene Rutherford does not have great expectations upon graduating high school in her small Texas hometown--she has no expectations. A car raffle rigged in her favor allows her to take the road to Austin. Ultimately, she discovers that revisiting the past requires just as much courage as adapting to the future.