Connect with Judith B. Fowles 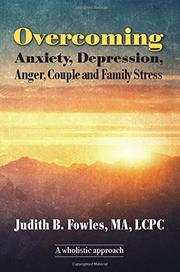 BY Judith B. Fowles

Debut author Fowles doesn’t fill her pages with anecdotes, tips, lists, and metaphors, as so many other self-improvement books tend to do. Instead, she offers a succinct, minimalist approach to handling issues such as anxiety and depression when they create dysfunction in family and couple relationships. The opening chapters offer insights into making certain one’s “self” is honored in any relationship dynamic. She emphasizes the importance of saying “yes” only when one means “yes,” and not when one simply wants to appease, avoid tension, or seek approval. She further expands the notion of honoring the self’s desires with a chapter on quieting negative “voices”—beliefs formed in childhood regarding one’s sense of self-worth and self-image. Although her anecdotes are few, they are powerful; for example, she offers an illustration of two different girls getting ready to go to the same birthday party. One’s family members encourage, support, and praise her when she shows her new dress to them. The other’s family puts her down, criticizes, and shames her. It becomes clear that the two girls will grow up with entirely different notions of self. Fowles expertly weaves this same idea into later chapters about couples and families, pointing out that these dynamics draw on past affirmations or degradations. One of the most valuable chapters teaches “passive listening,” in which a listener supports someone by refraining from posing questions, imposing judgments, or giving extensive advice, in order to give the person space to arrive at his or her own realizations. This author also demonstrates this powerful tool through scripted examples.

An invaluable book about developing empathy in relationships and strengthening one’s inner voice.