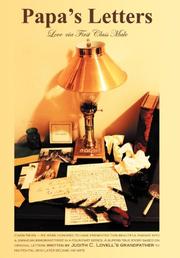 Lovell, in her debut biography, recounts the real-life courtship of her maternal grandparents through a treasured set of letters sent from Brooklyn, N.Y., to Jamaica in the early part of the 20th century.

In this well-structured work, Lovell produces an intimate portrait of her family members that encompasses broader themes of immigration, race, religion and community. After a devastating earthquake struck Jamaica in 1907, an educated young man named David Clarence Hurd made a decision to seek his fortune in America, the fabled land of opportunity, “[a]rmed with his Bible, $50, and a letter of introduction.” Six years later, Hurd (the “Papa” of the title) began a correspondence with Avril Louise Cato (who later became Lovell’s “Grandma”). Papa’s letters, presented here as one of the book’s five chapters, were originally published as a four-part series in New York City’s Carib News newspaper in 2010. Readers of that series provided feedback and questions that inspired Lovell to expand the scope of the project; this book includes four chapters of supplemental materials, including photographs, maps, historical context, additional research and reference notes, plus an introduction written by the author’s aunt, the youngest of Papa and Grandma’s six children. Toward the book’s end, Lovell intriguingly looks at her son Kwame’s experiences as a member of “Generation Y,” and compares her grandparents’ experience with current norms of courtship, including recent developments in technology and social media. In this context, readers may marvel at the fact that Lovell’s grandparents didn’t meet or even hear each other’s voice until the day before their wedding in 1914. (Telephone service had not yet been established in Jamaica.) Overall, readers will likely agree with Lovell’s description of Papa’s words: “I actually feel the loneliness of a Jamaican immigrant, miles away from home. I imagine the pain of a black man striving desperately to be successful in America, a foreign and often hostile place. I understand the excitement and anxiety of a fiancé planning for the first meeting of his beloved bride-to-be.”

A remarkable tale of love, faith and perseverance that underscores the importance of preserving family history.