Connect with A.K.A. Chisti

Dr. Neil Douglas-Klotz (A.K.A. Chisti) is a world-renowned scholar in religious studies, spirituality, and psychology, specializing in the languages and culture of the ancient Middle East. A frequent speaker and workshop leader, he is the author of several books on the Aramaic words of Jesus, including Prayers of the Cosmos (HarperCollins 1990), The Hidden Gospel (Quest 1999) and Blessings of the Cosmos (Sounds True 2006). His works on Native Middle Eastern spirituality and Sufism include: The Genesis Meditations (Quest 2003), The Sufi Book of Life (Penguin 2005), Desert Wisdom (ARC 2010) and The Tent of Abraham (Beacon 2006), with Rabbi Arthur Waskow and Sr. Joan Chittister. Douglas-Klotz directs the Edinburgh Institute for Advanced Learning and served for many years as cochair of the Mysticism Group of the American Academy of Religion. He also cofounded the International Network of the Dances of Universal Peace in 1982 (dancesofuniversalpeace.org). In 2004, he helped begin the Edinburgh International Festival of Middle Eastern Spirituality and Peace (mesp.org.uk), and in 2005, he was named Kessler-Keener Foundation Peacemaker of the Year for his work in Middle Eastern peacemaking. For information on his work, see the website of the Abwoon Network: www.abwoon.org.

A Murder at Armageddon is his first historical mystery novel of a planned series set in Roman Palestine featuring the scribe Yehuda Tauma (the biblical Thomas) and his friend and bodyguard Ioannis Vivis (the biblical John).

“The mystery itself is gripping enough—unfurling slowly, tantalizingly—but the history provided as a backdrop to the fictional narrative is mesmerizingly real.”
– Kirkus Reviews 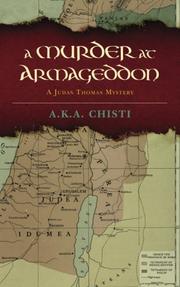 A Murder at Armageddon

A murder mystery set in an ancient Israel distempered by political conflict.

Shemuel ben Yahayye, a scribe in his advanced years, has been found murdered, discovered by, among others, one of his students, Yehuda. The murder itself would not normally be considered unusual—he was found in an area known to be dangerous—but nomadic bandits would surely have taken his valuables. Both aggrieved and suspicious, Yehuda takes it upon himself to investigate Shemuel’s death, with assistance from his young bodyguard, Ioannis Vivis. Yehuda remembers a letter he recently received from Shemuel, only notable for the strange message it contained inside: “Learn what eye has not seen and what ear has not heard.” Shemuel also inserted the same message into an old manuscript he asked Yehuda to track down. Partly on the basis of a mystical vision, Yehuda comes to believe that Shemuel was cryptically pointing toward the existence of treasure buried beneath a temple, treasure that could be used to fund a revolution against Roman occupation of their lands. Also, the more Yehuda discovers, the more he comes to believe that Shemuel was much more than a religious personage or scholar; he may also have been a member of an underground rebellion intent on throwing off the yoke of political oppression. The author of many books, Chisti (The Sufi Book of Life, 2005, etc.) is a religious scholar whose erudition is evidenced on every page. He paints a vivid picture of a Jerusalem rife with political and cultural discord, struggling to maintain its historical identity under the boot of tyranny. The consequences of that internal conflict are deftly personified by half Roman, half Israelite Ioannis, who has also suffered greatly at the hands of the Romans, relegated to slavery as punishment for his father’s political allegiances. The mystery itself is gripping enough—unfurling slowly, tantalizingly—but the history provided as a backdrop to the fictional narrative is mesmerizingly real.

An artfully rendered amalgam of history and fictional inventiveness.

Prayers of the Cosmos

In two previous books, Neil Douglas-Klotz pioneered a radical new way of translating the words of Jesus---filtering them through the imagistic worldview of the Aramaic language which Jesus himself spoke. Seen through this lens, familiar sayings such as "Blessed are the meek" come into vibrant contemporary focus as "Healthy are those who have softened what is rigid within." In The Hidden Gospel, Douglas-Klotz employs this approach to decode the spiritual and prophetic messages hidden within key words and concepts in the sayings and stories of Jesus. We learn to our delight, for instance, that when Jesus spoke of "goodness" he used a word which in Aramaic means "ripe" and refers to actions which are in time and tune with the Sacred Unity of all life. The Hidden Gospel aims to bridge the gap between the historical Jesus of the scholar and the Jesus of faith of Christian believers. It will appeal to everyone looking for an alternative spiritual vision of Jesus and his message.
Published: March 1, 1999
ISBN: 083560795X

The Sufi Book of Life

Part meditation book part oracle and part collection of Sufi lore poetry and stories THE SUFI BOOK OF LIFE offers a fresh interpretation of the fundamental spiritual practice found in all ancient and modern Sufi schools - the meditations on the 99 Qualities of Unity. Unlike most books on Sufism which are primarily collections of translated Sufi texts this accessible guide is a handbook that explains how to apply Sufi principles to modern life. With inspirational commentary that connects each quality with contemporary concerns such as love work and success as well as timeless wisdom from Sufi masters both ancient and modern such as Rumi Hafiz Shabistari Rabia Inayat Khan Indries Shah Irina Tweedie Bawa Muhaiyadden and more THE SUFI BOOK OF LIFE is a dervish guide to life and love for the twenty-first century.
Published: Feb. 22, 2005
ISBN: 0142196355