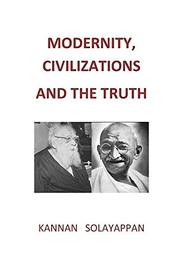 MODERNITY, CIVILIZATIONS AND THE TRUTH

Solayappan searches for an ethical center of modernity in this debut work of philosophy.

The modern world came into being around A.D. 1500, when economic and technological developments in Europe caused the West to advance at an accelerated pace from the rest of the world. Prior to that time, the globe’s major pre-modern civilizations existed at more or less the same level of maturity. The four philosophies that provided them with their traditions— Confucian, Indian, Islamic, and Christian—had been “perfect and ethical in their inception,” though each had then “degenerated fairly soon.” The major philosophical engines of the modern world—European Enlightenment values, Marxism—have been based in pragmatism rather than morality. In searching for an ethical modernity, Solayappan focuses his attention on the Indian independence movement. “With the advent of modernity,” the author writes, “it was only in India, during the first half of the 20th century, that a discourse on ethics was carried out in the public sphere.” In the cauldron of modern colonialism, Solayappan explores how an ethical movement fared in the modern world and traces its ramifications for the nature of truth and the chances for a peaceful world. The author has a natural, professorial prose style and is adept at organizing huge swaths of history and human experience into easily digestible concepts. While his thesis is never fully apparent (even by the book’s end), his ruminations are compelling enough to keep the reader more or less content to follow his train of thought. His prescriptions for how to create a more ethical world are as attractive as they are impractical (“America needs to do three things to transform its capitalist system overnight into an ethical system”), but the book succeeds as a work of imaginative thinking as opposed to a manual for immediate change. Solayappan asks the reader to question the way that things are, to consider how they have been, and to always remember that this moment—though one of great fluctuation —is but a brief one in the long history of human self-improvement.

An intriguing book about the continuing evolution of civilization.