Karen Adams is the award winning author of Woman in Scarlet which is the ground breaking true story of life as a woman in an elite, male-only police force. The memoir documents her 28 year career as one of the first women in the RCMP in 1974. She tells her story in such a fashion that readers are reported on laughing at the numerous antidotes and crying at the disappointments and struggles suffered during her career.


Karen was a trail blazer for diversity change with in the RCMP, confronting issues that only effected women and other minority groups. She was a very well respected police officer both internally and in the community, known for her compassion and sense of fairness.


Karen’s dream upon graduating from the Training Academy in Regina, was to someday return as an instructor. For many years, she was told to give up on her dream, but Karen preserved until in 1988, amidst a huge organizational back lash, the RCMP promoted and transfer 8 women into instructors positions at their learning centre. Karen’s abilities to connect with her learners was so recognized that she spent a total of 12 years on two tours, teaching/facilitating the newest members of the organization.


While working full time and teaching all over North American, volunteering in the community and raising two daughters as a single parent, Karen made the decision to apply for graduate school at the University of Regina. She attended university as a part time student and in 2002 was awarded a Masters Degree in Adult Education.


Five days after graduating with her degree, she was hired by MacEwan University in Edmonton to teach in their Law Enforcement Programs and to head up the newly developed Aboriginal Policing Program. She became the first retired female police officer to be granted tenure in the history of the Law Enforcement Programs. She taught for 11 years until her retirement in 2013. In her 23 years of full time teaching, Karen influenced a generation of Law Enforcement Officers across North America. Karen is known for her sense of humour, for her brutal honesty, and for being a straight shooter, always motivating her audiences to be the very best that they can be.


Karen’s experience in diversity extends beyond her professional life. She is also the mother of two bi-racial daughters and knows how crucial and horrific society as be.

“An engaging no-frills account of the challenges and rewards of being a female Mountie"!”
– Kirkus Reviews 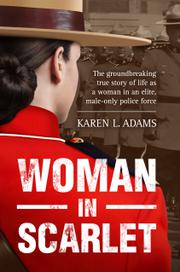 A writer recalls her time as one of the first women in the Royal Canadian Mounted Police in this debut memoir.

“On May 23, 1974, my whole life changed,” confides Adams in the opening chapter of her book. This was the date when the RCMP announced that it would begin “accepting female recruits.” The author was a 22-year-old single woman from the Manitoba prairies, and the news made her spring out of bed “like it was Christmas morning.” The memoir describes the recruitment process—some of the tests were “gender-biased” toward men, and Adams almost failed the eye exam. She goes on to recall her training, ranging from driving to self-defense, before graduating and receiving her first posting in Thompson, Manitoba. The author explains the challenges facing a female Mountie, from being “scrutinized at every turn” to being sexually assaulted by a higher ranking male officer. Adams describes day-to-day duties, including going undercover to investigate drug dealers and dealing with drunks. She also explores the difficulties of being a single mother while serving with the RCMP and how being sexually assaulted resulted in her silently suffering from PTSD, which later affected her daughters. Adams’ memoir is a no-nonsense confessional: “My life in the RCMP was a constant fight for survival. That meant taking my negative and/or positive emotions and filing them away, never dealing with them.” Her recollections of being sexually abused are gut-wrenching but she addresses her resultant PTSD with courage and determination: “I refuse to let it identify who I am or to diminish my past accomplishments.” A trailblazer for women in the RCMP, the author remains modest throughout the book and is unafraid to throw in some wry wit: “I noticed that the person described had blue eyes. But the person standing in front of me had dark brown eyes. In the police universe, this is what you would call a clue.” While Adams’ childhood is covered in an addendum—it reveals why serving with the RCMP became her dream—this information would have been more useful at the beginning of the book. Still, with its endearingly straight-talking approach, the author’s enlightening story should prove inspirational and informative for women eager to follow in her footsteps.

An engaging, no-frills account of the challenges and rewards of being a female Mountie.

Helping people be the Best that they can be!