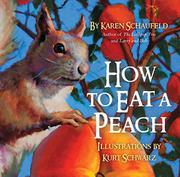 HOW TO EAT A PEACH

A squirrel who loves peaches goes up against a gun-toting farmer in this book for early readers.

Farmer Fred has no family, but he does have “Tree,” which he protects behind a wall with a rifle. Tree’s fruit is enormously precious to him: “Tasting a peach just plucked off the branch was as close to eating heaven as you could get.” But no one, other than Fred or the judges at the county fair, has ever eaten them. Squirrel, too, adores peaches; indeed, they’re his passion. When Squirrel spots Tree, he becomes determined to get over the wall. Though other squirrels laugh at him, his hard work making a ladder pays off, and finally he tastes Tree’s fruit, which is “everything Squirrel had dreamed of and hoped for his whole life.” After Farmer Fred catches him, he realizes that the animal must appreciate peaches as much as he does, and he offers to share the fruit if Squirrel will help with guard duty. The two bond over their shared life’s work, but when Girl Squirrel parachutes over the wall next summer, Squirrel finds himself protecting her. Farmer Fred comes to a realization: “Eating peaches, together with Squirrel, made them even sweeter.” He takes down the wall and invites all the squirrels to share the delicious fruit. In this story about determination, following one’s passion, and the joy of sharing, Schaufeld (Larry and Bob, 2016, etc.) avoids obvious didacticism, instead focusing on the sweetness of peaches and companionship as well as the satisfaction of working for a goal. Fred finds real happiness in expanding his idea of family; both man and squirrel convincingly discover that passion shouldn’t become obsession. One quibble: The name “Girl Squirrel” assumes that male is the default. Returning collaborator Schwarz paints with pleasingly rich, saturated hues; the peaches look absolutely luscious, as they should. His realistic, varied illustrations capture expression and drama well, such as Girl Squirrel’s look of determination as she broaches Tree’s enclosure and Fred’s smile as he takes down the wall.

A sweet but never cutesy story with delightful illustrations. 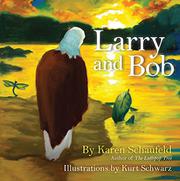 Two animal fathers form an unusual friendship in this quirky but touching picture book from author Schaufeld and illustrator Schwarz (The Lollipop Tree, 2013).

Larry is a bald eagle guarding his egg in a tall tree. Bob is a smallmouth bass, “protecting 19,003 eggs” in the river below. When Larry catches Bob, the fish doesn’t simply accept his fate as a meal; he appeals to Larry, “dad to dad,” agreeing to let the eagle eat him in one year, after his own fry are grown. Larry is skeptical but makes the deal, and ultimately, this decision saves the life of his chick, Larry Junior, whom Bob later rescues when he falls into the river. When Bob finally goes to meet his fate, Larry can’t eat him—after all, the fish saved his son. Instead, they form an unlikely friendship. The eagle confesses that, as a solitary bird, he feels lonely, and Bob, despite being surrounded by other fish, reveals that he feels the same. For years, the predator and prey meet at a rock, swim and fly upstream together, and talk about their problems. But eventually, Bob’s age catches up with him, and he asks Larry to take him on one last flight. Overall, this is a touching story, and Schaufeld tells it in a calm, melodic style. The placement of the two male characters as caregivers and primary parents puts a nice spin on gender expectations. Schwarz’s realistic paintings are beautifully rendered and include some exquisite landscapes. Kids will enjoy finding the dragonfly that Schwarz has hidden on each page, but adults will appreciate the illustrator’s unique eye; for example, several paintings show the fish’s perspective from underwater, and the textured results are suitable for framing.

A well-constructed book that depicts a healthy male friendship. 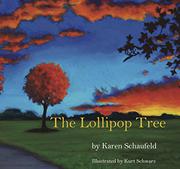 A little tree tries to overcome setbacks—and learns that she can heal—in this debut picture book.

A tiny shoot grows into a seedling and then a sapling. When she and other trees are planted in a row along a road, she’s proud of her height and how much she resembles her cohorts. One night, lightning strikes the tree; passers-by fear she will be cut down. But she wills herself to grow, and when she recovers, she has a new shape and a nickname: the Lollipop Tree. Soon she suffers another hardship when a driver knocks half her roots out of the ground. But with the help of the man and his companions, she gets a second chance to thrive. The realistic paintings by debut illustrator Schwarz feature lovely landscapes and skyscapes. While a few humans appear, the images often offer a tree’s-eye view of events. Each image contains a praying mantis, which lap readers should enjoy hunting for. The sentences, like Schaufeld’s contemplative story, meander. The frequently challenging vocabulary (fragrant, pliable) makes this a suitable read-aloud. The tale’s largely quiet movement through the seasons—and its happy ending—gives it an appealing tone for nap or bedtime reading. Independent readers may grasp the deeper concepts: that healing requires resolve; struggles may seem unfair; and surviving a problem instills confidence to confront the next one.

While its unusual structure and poetic language may puzzle audiences, this empowering story of beating the odds and the beautiful paintings should encourage rereading.