Karl Bakke is a professional screenwriter and a vested member of The Writers Guild of America and The Screen Actors Guild. Some of the studios Mr. Bakke has secured writing deals with include Sony, MGM, Miramax and Columbia Pictures, working with producers such as Wes Craven, Todd Black, Glen A. Larson and Arthur M. Sarkissian, to name a few. He is represented by Sandra Lucchesi at The Gersh Agency and Justin Silvera at Silvera Management for screenwriting, but is currently seeking new representation for his endeavors in the literary world. When not in Los Angeles, Mr. Bakke resides in Carlsbad, CA. This is his first novel. 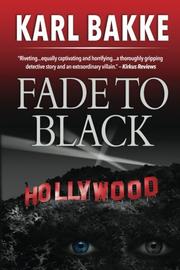 In this debut thriller, a former actor turned sleuth searches for a serial murderer whose victims may point to the private eye himself as the killer’s ultimate goal.

Will Spire had once been Will Wallace, his stage name years ago when he was playing Dr. Steve Scott on a soap opera. Now a licensed private investigator, he agrees to help his ex-wife, Stacey, whose movie-producer boyfriend, Bob Bayloff, is missing. Will unfortunately finds his body, and the subsequent discovery of Bob’s agent, Alfred Green, killed in a similar manner, suggests an apparent link. But the scene of a third murder includes Will’s headshot near the victim, an obvious taunt and a possible threat against the gumshoe. This puts to the top of the suspect list Bud Williams, aka Blue, a sex offender Will aided in capturing and who, due to a mix-up at the prison, was just released. The FBI enters the investigation, while Stacey’s sudden abduction only intensifies Will’s hunt for Blue. The PI’s friend, LAPD Detective Dan Patrick, and his partner, Joe Dolen, are also on the case but may not be convinced that Blue’s their culprit. Someone’s keeping Stacey alive (for now), but Will and the detectives surely don’t have long to track her down. Bakke’s dark and often violent thriller centers much of the story on tortured characters, from the murderer (sometimes in the process of killing) to one or more of Blue’s fellow patients at an institution where he once stayed. Even Will’s first-person voice lingers on the seedier side of sunny California or glamorous Hollywood: he ponders a death in LA traffic, an accident that would merely incite commuters (“How dare he die while I’m trying to get home!”). Though some readers will guess the killer’s ultimate reveal, it’s still riveting as Will pieces together the evidence (and catches at least one beatdown), while a spotlight on the killer’s psyche (via an unnerving perspective) is equally captivating and horrifying.

A somber but thoroughly gripping detective story and an extraordinary villain.