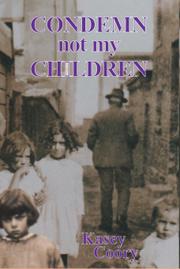 Condemn Not My Children

In 1887, Jacob Habib El Khouri Eleishah Fahkrey, a young Lebanese man who once trained for the priesthood, mentions to his wife, Eva, that they should venture halfway around the world to a place called New Zealand. Jacob explains, rather casually, “My uncle went there to find gold. He stayed even though he never found any.” Not long after, they venture from their home in Lebanon for a new life abroad. After they settle and simplify their surname to Cahoury (thanks to a misunderstanding with an immigration official), the two go on to have 12 children and establish themselves in a growing community. They even get their beloved son Phillip set on a life in the priesthood. Years later, in 1917, a grocer’s daughter, Millicent, and a soldier, Alfredo, form a courtship in England. Though their marriage turns horrifically sour, it still produces children (including the beautiful, auburn-haired Dorina) and involves another move halfway across the world to New Zealand. The story follows both families. The two lineages eventually unite in a troubling, violent encounter, and the book tracks the consequences of that incident into the 1960s. Coory weaves a tangled family history here, complete with heroes and villains, including a not-so-genteel woman who wants to purchase Dorina and a troubled priest trying to hide someone else’s indiscretions. The author is adept at pulling together stories of many different people of many different stripes, and the results are as outrageous as they are believable. Some of the third-person narration is needlessly blunt, as in this description of a girl who was molested by a priest: “Sexual abuse and parental betrayal interrupted Selena’s adolescent journey from the insecurity of pubescence to the wonderment of womanhood.” The readers’ experience of seeing how all the far-flung pieces of ancestry wind up fitting together, though, proves far more worthwhile.

A complex, eventful story that unfolds over multiple generations, hampered at times by editorializing.