Katherine Spada Basto is the award winning author of "Days to the Gallows: A Novel of the Hartford Witch Panic." Ms. Spada Basto was a teacher for many years before she decided to become a full time writer. "Days to the Gallows" since its December 2016 publication has garnered four awards including Finalist in the Next Generation Indie Book Awards for Historical Fiction, Finalist for the National Indie Excellence Book Awards for Northeast Regional Fiction and placed Winner in the Wild Card Category for the Hollywood Book Festival.
In her spare time, Ms. Spada Basto enjoys the study of Mythology, Ancient Civilizations, history, painting, traveling, reading and spending time with her rescue dog and cat. She lives in Connecticut and is presently working on her next novel that takes place in Ancient Rome.

“A superb addition to the historical fiction genre, this engrossing witchcraft tale should appeal to a wide-ranging audience.”
– Kirkus Reviews 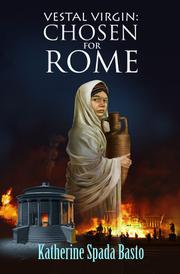 A historical novel features a vestal virgin in ancient Rome encountering the new religion of Christianity.

This book from Basto, following Days to the Gallows (2016), opens in C.E. 60. Cornelia Cosa, the pampered 10-year-old daughter of a prosperous wine merchant, is chosen in a lottery to become a vestal virgin, a member of Rome’s most venerated and venerable female religious society, charged with preserving the morals of society. Vestals serve 30-year terms and are revered by all strata of Roman society. But being torn from her family is naturally a rude shock to Cornelia. In carefully researched and well-crafted prose, the author uses Cornelia as a viewpoint character through which to introduce her readers to the inner world of the vestal virgins (“I climbed the seven steps and entered my new home feeling as bald as a baby bird,” the young girl muses as she begins her journey). Readers meet her fellow sisters in the House of the Vestals and learn the lore and history of the order as Cornelia grows older and adapts to its rhythms. One day, a friend among the vestals takes Cornelia to the house of a man named Paul, leader of the fledgling Christian faith and gadfly to the Emperor Nero. Cornelia sees a “small, bandy-legged man with the balding head and tufts of red and gray hair sticking up on the sides.” Paul impresses her; his message about the ministry of Jesus thoroughly converts her friend and troubles Cornelia’s thoughts. As the years go by, Cornelia’s family experiences business reversals, and Nero deteriorates into a brutal tyrant. Basto does a very readable, confident job of playing all of this against the backdrop of personalities and intrigue inside the Temple of Vesta. Cornelia herself is a lovable, headstrong character who will make a deep impression on readers.

A solidly grounded, atmospheric evocation of Nero’s Rome at a crossroads of faith and crisis. 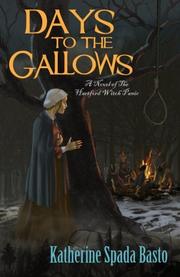 DAYS TO THE GALLOWS

Hysteria in Connecticut spells trouble for those on the periphery in this debut novel set in the 17th century.

In 1662, two young women witness an unusual midnight gathering on Hartford’s South Green. The merrymaking is taken as witchcraft, and the women, Hester Hosmer and Ann Cole, are soon at the center of a mania that grips their close-knit, Puritanical town. Ann, a troubled girl who was once an outsider, finds herself with power and attention. After a child’s untimely and inexplicable death, Ann begins lobbing claims of witchcraft at the men and women she spied on the green. The foreboding town marshal, the reverends, and the God-fearing villagers all heed her allegations and set out to rid themselves of the supposed evil in their midst. The accused are arrested. Trials, tests, and hangings commence. Hester distances herself from Ann and her smug delight in the success of her charges. As Hester watches the mounting frenzy, she begins to question the actions of not just Ann, but her family and neighbors as well. Her only ally is Tom, the peddler’s son, who urges Hester to leave the fanaticism behind and join him somewhere new and safe. Basto’s novel is a well-written and -researched account of a historical event. The Hartford witch panic is the lesser-known but no less captivating precursor to the Salem witch trials. The author skillfully demonstrates how quickly fear and panic can spread, insidious forces that ultimately leave no one above suspicion. Hester is an excellent narrator, an insider who undergoes a subtle but marked change in her beliefs and perspective. Where others see God’s will, Hester comes to identify deception, prejudice, and alarm. Basto also sets the scene well, bringing the sights and sounds of the Hartford Town Market to life. Her descriptions of the witch trials, including the appearances of the suspects, the rumblings of denunciations, and the damning silence of those who refuse to speak up for the innocent, are clearly and vividly wrought.

A superb addition to the historical fiction genre, this engrossing witchcraft tale should appeal to a wide-ranging audience.

DAYS TO THE GALLOWS: A NOVEL OF THE HARTFORD WITCH PANIC: WINNER-Wild Card: Hollywood Book Festival, 2017

DAYS TO THE GALLOWS: A NOVEL OF THE HARTFORD WITCH PANIC: Honorable Mention-History: Hollywood Book Festival, 2017