Katherine Winfield is a seventh-generation Washingtonian, Winfield currently resides on a horse farm on the Eastern Shore of Maryland. She attended the University of Maryland where she studied English and Psychology. She has written numerous essays, short stories and poems and is a member of the Rehoboth Beach Writers Guild, Eastern Shore Writer’s Association and the North Carolina Writer’s Network.
She is the author of the Corsica Series, mystery novels set on the Eastern Shore of Maryland. Haverford House, the first in the series, earned five-stars from Foreword/Clarion Reviews and was a finalist in the INDIEFAB Book of the Year Award. Belle Grove, is the second installment and has received much acclaim as well.
Her third novel, Bending Toward the Light, is a year-long journey in a woman’s quest to find independence. One of her short stories, The Water’s Edge, will appear in the newly released anthology, She Writes, Visions and Voice of Seaside Scribes.

““It’s a feel-good drama that fans of the genre will love. An inspiring…tale of a woman reclaiming her life.”—Kirkus Reviews”
– Kirkus Reviews 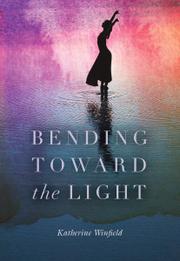 BENDING TOWARD THE LIGHT

A woman strives to rebuild her life after leaving a loveless marriage in this novel by Winfield (Belle Grove, 2016, etc.).

To outsiders, Rory Jensen seems to have all the trapping of a perfect life, including a marriage to a Phoenix police detective and a loving daughter in graduate school. In reality, she’s trapped in a loveless, emotionally abusive marriage. One day, she decides that she can’t take it anymore, so she hits the road with no clear destination in mind. She eventually finds herself in Willow Bend, a small town in Northern California, where no one knows who she is. There, she rents a cottage at Willow Grove Resort and, for the first time, must get by on her own, without anyone to take care of her. This means making new friends—including neighbor Marlena and handsome deputy park ranger Will Powers—and holding down a job for the first time in years. Later, her old flame Ben Colters appears, which further complicates matters. She’s soon faced with some tough decisions: Is she truly ending her relationship with her husband? Is she ready to date again? And can she finally confront a traumatic childhood incident that continues to haunt her? Winfield takes readers through a year in Rory’s life, and it’s empowering to watch her grow from a woman who second-guesses herself to one who confidently takes control of her life. As a result, Rory is a believable, sympathetic heroine, and the novel’s supporting characters aren’t clear-cut heroes and villains, as Winfield develops them with depth and nuance. The story does follow a well-trod path; “Finding myself…what a cliché,” Rory says at one point. However, it’s a feel-good drama that fans of the genre will love.

An inspiring, if not groundbreaking, tale of a woman reclaiming her life.

The Eastern Shore fishing town of Corsica, Maryland is about to be shaken again from its idyllic way of life. Julie Seevers, owner of a local herb shop, is spending too much time on her business and her marriage begins to suffer from neglect. Julie’s summer assistant, Tabs Tucker, a misanthropic teen, is on a quest to find her father. And Julie’s best friend, Libby Langston, who is looking for something to ignite the languor of the hot summer, decides to help Tabs in her quest. But when Sonia Barnes, a newcomer to town, enters the shop they soon discover they are on a twisted path of betrayal, lies, clairvoyance, and even murder. Belle Grove continues on another journey by weaving rich and unique characters through a mysterious plot set against the mystically beautiful backdrop of the Eastern Shore.
Published: Dec. 6, 2016
ISBN: 978-1534695214

When Josh and Libby Langston move from Baltimore to a small fishing town on the Eastern Shore of Maryland, they’ll soon find out that the sleepy town of Corsica has some deep-rooted secrets. Thinking that she has finally found the perfect place to call home, Libby will discover her new dream house has a troubled past that is about to be awakened. HAVERFORD HOUSE has sat vacant for sixteen years and is in need of many repairs. Having the summer off from her teaching job Libby plans on tackling the renovations. With Josh busy in his new partnership at a Baltimore law firm, Libby is alone in the house for long periods of time, or at least she thinks she is alone. When a Haverford descendant, who died over a hundred years ago at the house, begins sending Libby cryptic messages to “Save her”, Libby seeks the help of some of the townspeople. One of them, a diminutive African-American woman, TASSIE JACKSON, the town’s oldest living resident, guides Libby to find out more about a suspicious death that took place in the house twenty years ago. The previous owner of the house, one of Josh’s new influential clients, is running for the U.S. Senate in the upcoming election. When he finds out that Libby is stirring things up about the death of his wife so many years ago, he confronts her, worried that she will ruin his chances of winning. Libby ignores his pleas for her to stop digging and discovers too late that sometimes the past is better left alone.
Published: Sept. 23, 2013
ISBN: 978-1986280501