Kathleen Glassburn lives in Seattle, Washington with her husband, three dogs, a feral cat, and a 50-year-old turtle. Her horse lives in a boarding stable nearby. She rides at least three times a week. Her other loves are playing the piano and singing.

She makes time every day to write -- and wishes there were more hours in the day.

Her first published novel, Making It Work, came out in March of 2017. She is at work on a new novel and is always writing or re-writing short stories. Kathleen has lived all over the United States and traveled extensively in Europe. This is reflected in her stories. She has had several published. Samples of these can be seen at her website: www.kathleenglassburn.com

She is also managing editor of The Writer's Workshop Review www.thewritersworkshopreview.net
She has held this position for over ten years and is very proud of this publication.

“A thoughtful, sensitive examination of the effects of war, sexism, and unfulfilling relationships.”
– Kirkus Reviews 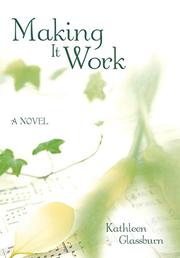 In Glassburn’s (Ridin’ High, 2015, etc.) novel, a young woman embarks on a journey of self-discovery after her new husband enlists in the military during the Vietnam War.

Nineteen-year-old Sheila Doty Gallagher left college to marry her heartthrob, Jim, and she’s just started to adjust to married life. She’s justifiably shocked when Jim announces that he’s joined the Navy. After he goes away for a brief training period, he returns and tells Sheila that they’ll be moving from Minneapolis to Long Beach, California, where he’s been stationed. Before long, she discovers that the domestic life she imagined isn’t going to materialize. Jim is sent on many assignments that require him to take prolonged absences from home, and each time he returns, the visits are increasingly strained. When his tour finally ends, Sheila hopes to repair their relationship; unfortunately, Jim informs her that he plans to re-enlist. She decides that she’s had enough of waiting around and subordinating her dreams to Jim’s plans. She sets off on a journey of her own, traveling to various parts of the country and trying out different lifestyles and relationships. As Sheila meets hippies, conservatives, adulterers, and friends during her travels, Glassburn paints a vivid panorama of life in America during the Vietnam War era. The story is rich with details of the lives of Navy wives and effectively portrays the conflicting perspectives in different parts of the country during the 1960s and ’70s. The many flashbacks to Sheila’s youth, interspersed throughout, tend to obstruct the flow of an otherwise gripping main narrative. At the same time, though, they do provide information about her formative years, her dysfunctional family, and the disparity between her childhood dreams and her adult reality.

A thoughtful, sensitive examination of the effects of war, sexism, and unfulfilling relationships.

A River Runs Through It By Norman Maclean

" Eventually all things merge into one, and a river runs through it." "I am haunted by waters." ~ Norman Maclean