Many people think about retiring overseas, leading an easy existence in a beautiful tropical setting. Kathryn Skelley-Bird and her husband Darrell did just that. Three days after Darrell retired, the Birds moved to Panamá where they planned to live less expensively, near the ocean, until they were old and decrepit. To facilitate that move, they sold their home, both cars and most of their worldly possessions. They returned to the States a mere 13 months later, finding that for them, the negatives of living in a less developed country far outweighed the positives.

In this book, Kathryn does not try to dissuade people from retiring overseas. She readily acknowledges that many people who retired to lesser developed countries and are quite happy. However, it is estimated that half of the Americans who retire abroad change their minds within a year and return home, at great cost both financial and emotional. Therefore, in "Retire Abroad? Think Real Hard!" the author asks the readers to interrogate themselves as to the reason(s) they are thinking about retiring abroad. This exercise will help identify those people who probably won't make it in a foreign country.

For those who still want to retire overseas, Kathryn provides lots of helpful information, including tools and lists to ensure that everything that needs to get done does get done, and on time. She provides factual information as to the actual cost of living in a foreign country. Unless one 'goes native,' one is not going to experience the very low cost of living that certain publications tout. Kathryn goes on to provide valuable insight into what one will encounter upon arrival at the retirement destination, as well as another list of everything that will have to be done in the expat's new home.

This book started as a 'how to' manual but, as soon as she began writing, Kathryn realized that she would tell her story; the story of why she and her husband accelerated their retirement date; of the challenges they encountered; of the emotional roller-coaster ride; of the costs (financial, physical and emotional) involved in retiring abroad. She wraps up by sharing with readers the total costs of moving to Panamá and of returning home. 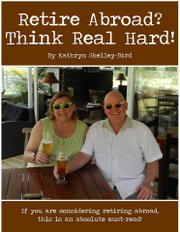 Skelley-Bird walks readers through the steps required to retire abroad in this debut manual.

Plenty of people daydream about retiring to a different country—perhaps with a warmer climate or a lower cost of living—at one point or another. But how many actually consider the steps involved? Skelley-Bird retired with her husband, Darrell, to Panama (and subsequently moved back to Nevada). She is here to tell you that, while there are many hoops to jump through, retirement abroad is an achievable dream. “There were what seemed like hundreds of small details that required attention, as well as literally dozens of not-so-small tasks to accomplish,” writes the author. “Within these covers you will find my time-lined detailed ‘To Do’ List, without which I would have lost my mind.” Skelley-Bird, using her own experiences as an example, informs readers about all the obvious (and not-so-obvious) actions involved, from selling their houses, cars, and most of their possessions to hiring an immigration attorney and figuring out living arrangements and insurance in the adoptive country. The author shares the experiences of other expat couples who have chosen to move to Panama as well as a couple who considered that nation but ended up remaining in the United States. Along with numerous photos and spreadsheets documenting the various preparations, Skelley-Bird offers advice on the less-tangible aspects of making the decision (such as interrogating the motivation for moving). Nearly everything costs more than one would expect, but the author is here to attest that retiring abroad is possible for those willing to do the homework and legwork. Skelley-Bird writes in a cheerful, accessible prose that reflects the original Facebook notes upon which this book is based. Her editorial voice captures her quirky personality, as displayed in the original list of priorities that she and Darrell made when selecting a country: “No hurricanes, which ruled out most of the Caribbean,” and “Close enough to the States that friends would visit. (Without exception, every person we asked said they would not visit if we moved to New Zealand; the flight is just too long.)” The manual is based heavily on the experiences of Skelley-Bird and couples whom she knows, which means that it is perhaps overly specific to the Panama scenario. Even so, much of the information it contains is applicable to moving anywhere outside of America, and the process by which Panama was chosen illustrates many of the practical compromises that a would-be expat must make. The author includes many useful pieces of advice that might not occur to retirees itching to make the plunge. For example, about half of Americans (including the author) who retire abroad find that they dislike it and end up moving back home. For this reason, renting out your house in the United States as opposed to selling it (and renting a place in the new country) is advisable, at least for the first year. The book’s specificity and the author’s real-world experiences make this smart reading for Americans thinking about spending their golden years in another country.

An idiosyncratic but highly informative guide to retiring outside the United States.