Connect with A. Katie Rose

A. Katie Rose is a workaholic living in San Antonio, Texas. With her day job as a photographer, she writes in what little remains of her spare time. She enjoys long walks, reading (when possible), watching movies, red wine, and drinking beer around a fire with friends. Among her extracurricular activities, she rides her horses and rescues cats.

A Colorado native, she earned her B.A. in literature and history at Western State College, in Gunnison, Colorado. Her first novel, “In a Wolf’s Eyes”, was published in April of 2012. Her second book, “Catch a Wolf”, was released in July, 2013. The third of the series, “Prince Wolf”, was released in May of 2014. “The Unforgiven” was published in march of 2015. Book Four, “Under the Wolf’s Shadow” was published in June of 2016. She is busy working on the fifth of the “Saga of the Black Wolf” series, “The Kinslayer”. 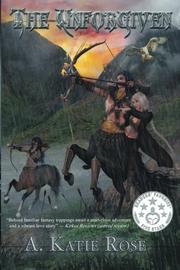 In this medieval tale, the conflict between two rival kingdoms escalates over an ancient prophecy.

Vanyar, a shape-shifter, former soldier, and drunkard, has just been tossed from a tavern in his native land of Bryn’Cairdha. On the grimy streets, he’s soon confronted by a Centaur named Malik, who runs King Roidan’s secret task force, the Weksan’Atan. He informs Vanyar that he's to sober up and rejoin the Atan as second-in-command for a special mission—or go to prison. Vanyar eventually agrees, and he travels with a contingent of Minotaurs, Griffins, Centaurs, and Shifters to rescue Princess Iyumi from her vile kidnappers near the border of the northern kingdom, Raithin Mawr. Meanwhile, in Raithin Mawr—where magic and monsters are forbidden—Prince Flynn is tasked by his father, King Finian, to find Iyumi, marry her, and fulfill a prophecy that will supposedly eradicate magic and join the two nations in peace. The situation is more complex than either side knows, for Iyumi, herself a prophetess, sees that a baby plays a key role in uniting the kingdoms. When she’s trapped in a cave by Raithin Mawr forces, she suddenly falls ill. Will Vanyar be able to help, or will the ghosts of a botched military action catch up with him? Rose (Prince Wolf, 2016, etc.) crafts an excellent stand-alone adventure from some of the fantasy genre’s most tried-and-true components. Her prose, wry in tone and comprised of long, loping paragraphs full of physical and emotional description, is pitch-perfect. Some lines find beauty in the story’s violence, as when Flynn kills someone and “his spirit fled to the folk who kept count.” Rose frequently uses slang to garnish the dialogue, not oversell it (Iyumi says, “Bite me, Vanyar”). Further connecting with modern audiences, she casts the violent behavior of Raithin Mawr citizens who blow people up as terrorism—and then cleverly draws the narrative to a point by which such acts are unnecessary. Tucked within is also a first-rate romance, making the characters that much more unforgettable.

Behind familiar fantasy trappings await a marvelous adventure and a vibrant love story.

My book trailer for my debut novel, "In a Wolf's Eyes"

Catch a Wolf, Saga of the Black Wolf, Book Two

Raine, Ly’Tana and the others escape Brutal’s trap, but with dire consequences. Kel’Ratan has been grievously injured, and Rygel must take him to safety to save his life. Yet, they are not out of danger. A monstrous storm called the Wrath of Usa’a’mah has halted their flight from Khalid and they must seek shelter within a remote monastery or die under the storm’s power. But High King Brutal has allied himself with the deadly assassins, the Shekinah Tongu. The secretive clan has sworn out a Blood Oath against Rygel in retaliation for his leaving their brothers in the forest to die. With their hellish hounds and Brutal’s dark wizard, Ja’Teel, they track Raine and Ly’Tana through the devastation left by the storm. Raine leads them into the west, toward Ly’Tana’s home of Kel’Halla, with Brutal’s menace confronting them at every turn. As he finds himself falling in love with the exotic Ly’Tana, Raine is plagued by a mysterious voice in his head. Is he going crazy? In Raine, Ly’Tana discovers the one man she cannot live without. However, an evil entity has targeted Ly’Tana, bent on her destruction. How can Raine, Rygel, Kel’Ratan and her griffin bodyguard, Bar, keep her safe from its vast, unseen power? Hunted by Brutal and his evil allies, Raine, Ly’Tana and their friends discover a new, and very strange, force dogging their trail – a pack of enormous, cunning wolves. Mysterious wolves who call to Raine in the night, and bring alive the secret he’s kept hidden, even from himself. Taunted by nightmarish visions, Raine is forced to confront his own dark demon – the beast within himself. Who will catch Raine and Ly’Tana first? Brutal and his pets – or the wolves? Thus begins the second novel of the Saga of the Black Wolf series.
Published: July 3, 2013
ISBN: 978-0-9904275-1-3

In a Wolf's Eyes, Saga of the Black Wolf, Book One

The Wolf Raine is a slave, a gladiator. Known as the Bloody Wolf, he is the champion of all champions in the Empire of Khalid. When Raine and his new wizard pal, Rygel, accidentally murder the High King, they set in motion events rapidly spiraling out of control. In saving each other, they forge a bond closer than brothers. The Warrior Ly’Tana is a warrior and heir to the throne of Kel’Halla, and set to wed Crown Prince Broughton of Khalid. Ly’Tana discovers the true, and violent, nature of her betrothed. Broughton, nicknamed Prince Brutal for his vicious nature, plans to kill her after their marriage. With her war-band, she flees his wrath and seeks to escape his evil empire. The King But Brutal will stop at nothing to have Ly’Tana for his wife. He brings down and captures her griffin bodyguard, Bar. Ly’Tana seeks the help of Raine and Rygel, and frees Bar from Brutal’s clutches. Raine and Ly’Tana are forced to flee for their lives, hunted by Brutal’s secretive assassins. Can they escape the hunters and their silent, evil hounds? Can Ly’Tana evade Brutal’s hungry need to marry her and seize her beloved country? Can Raine keep Ly’Tana alive and save himself from capture and torture? Can they stop themselves from falling in love?
Published: April 24, 2012
ISBN: 978-0-9904275-0-6

Raine has discovered that he is not just gai’tan, the werewolf, he is the direct descendant of the wolf god, Darius, and the Chosen One of the wolves. In accepting his wolf self, and merging both halves - man and wolf - he also accepts his role as the wolves’ savior: he must slay the monster that keeps Darius a prisoner. Unless Darius is freed, wolves will die out as a species. But Raine has had a vision, and has foreseen his own death. In order to keep his love, Ly’Tana, safe, he abandons her and all those dear to him. With only Darius’ voice in his head for company, he leaves behind his blood-brother, Rygel, his newly adopted wolf son, Tuatha, and his loyal Tarbane, Tashira, to travel to the frozen north alone and heartbroken. Angry and bewildered, Ly’Tana resolves to follow him north. Yet, her divine enemy makes another attempt to kill her. Under Rygel’s guidance and protected by a pack of enormous wolves, Ly’Tana, her kinsman, Kel’Ratan, and her warriors ride in search of a monk who can save her from divine retribution. High King Brutal hasn’t given up his chase to marry her and seize her beloved country, nor has the Shekinah Tongu turned aside from their Blood Oath to slay Rygel. Hunted by both men and gods, Ly’Tana rides in search of answers, before she can ride in search of her one true love. Will Raine escape the evil wizard Ja’Teel’s traps? Can he stave off starvation as he learns to hunt as a wolf? Can Ly’Tana survive the wrath of a god and outwit a murdering King? How will she endure treachery from within her own camp? Thus begins Prince Wolf, Book Three of the Saga of the Black Wolf.
Published: March 25, 2014
ISBN: 78-0-9904275-2-0

Under the Wolf's Shadow, Saga of the Black Wolf, Book Four

He must slay a monster. Raine travels with his companions, Tashira and Darkhan, to the frozen north. He must meet the Guardian in battle and fight for the freedom of the wolf god, Darius. Should Raine fail, and the Guardian slay him before he kills it, Darius shall never be free. Thus his beloved wolves will die out as a species. But the treacherous Ja’Teel sets his traps to ensnare him. And Raine must fight to keep not just himself alive, but his loyal friends as well. She will fight at his side. Pursued by a dark god bent on vengeance, Ly’Tana battles the evil Tongu and their daemon king. Accompanied by Rygel, Kel’Ratan, her Kel’Hallan warriors and the pack of enormous wolves she travels the high mountains to find Raine. Ly’Tana, Beloved of the Gods, must elude the one god who wants her blood spilled. Fighting to remain one step ahead of death, she seeks to fight beside Raine as he battles the Guardian. He will stop at nothing. The dark wizard Ja’Teel has invaded the holy mountain of the dragons, and snatched their most precious possession: the egg from which their next shaman will hatch. Unless Raine, Ly’Tana and Rygel are brought to him, he will slay the infant. Should he kill the hatchling, the dragons are forever sundered from their divine Mother. Thus begins Book Four of The Saga of the Black Wolf, Under the Wolf’s Shadow
Published: July 5, 2016
ISBN: 978-0-9904275-9-9