Ken McGorry has been writing since third grade. (He learned in first grade, but waited two years.) He started a school newspaper with friends in seventh grade, but he’s better known for his 23 years as an editor of Post Magazine, a monthly covering television and film production. This century, he took up novel-writing and "Ghost Hampton" and "Smashed" are examples. More are in the works, like the promised "Ghost Hampton" sequel but, though driven by personal demons, he is kinda slow.
Ken lives on Long Island with his wife and they have two strapping sons. There are dogs. Ken is also a chef (grilled cheese, and only for his sons) and he enjoys boating (if it’s someone else’s boat). He has a band, The Achievements, that plays his songs (try https://soundcloud.com/ken-mcgorry). Back at Manhattan College (English major!), he was a founding member of the venerable Meade Bros. Band. Ken really was an employee of Dan’s Papers in the Hamptons one college summer, and really did mow Dan’s lawn.

“Mystery fans should find this darkly comedic novel not only entertaining, but enlightening as well, as Hall’s redemptive, brilliantly plotted journey is both painful and poignant.”
– Kirkus Reviews 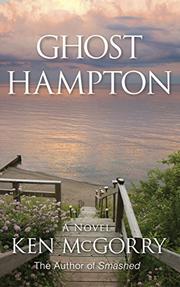 In McGorry’s Hamptons-based debut mystery, the first in a trilogy, an unlikable lawyer attempts to save a crumbling Victorian house, rumored to be a haunted former brothel, after experiencing deeply troubling visions.

The 55-year-old attorney Lyle Hall proves to be a paradoxical yet endearing character right from the very beginning of this novel. After he’s involved in an automobile accident that kills an elderly woman, he’s wheelchair-bound and also inexplicably has a new empathic ability. As a result, the formerly morally bankrupt lawyer now finds that he’s far more attuned to people’s suffering. After he sees an apparition of a girl and also experiences a premonition of the imminent death of his daughter, a newly promoted Southampton police detective, he’s moved to save the old Victorian and somehow free the tortured spirits inside. But the entire community is against him, his daughter thinks he’s crazy, and more than a few old enemies set out to discredit and humiliate him. Hall’s mission proves even more difficult when one media company, “the CNN of paranormal news,” makes him into a pop-culture celebrity and ignites a media frenzy. This fluid, cerebral narrative features a cast of unconventional characters and an offbeat sense of humor. The tone is very much reminiscent of crime fiction writer Charles Willeford’s, and the paranormal element gives the storyline a dark, almost surreal feel, especially when the town of Bridgehampton becomes a media circus, replete with tent cities filled with paranormal-activity aficionados. Mystery fans should find this darkly comedic novel not only entertaining, but enlightening as well, as Hall’s redemptive, brilliantly plotted journey is both painful and poignant.

A powerful tale about family, forgiveness, and, ultimately, salvation.

A Wall Street golden boy falls on hard times after surviving the attacks on New York's Twin Towers. Haunted by survivor guilt, Tom Butcher sank into a deep depression fueled by alcohol and pills until he lost his job, his wife, his young son, even his home. "Butch" realizes that the only way back to a semblance of straight life is to become a substance abuse counselor himself. But he quickly sees he's way over his head. And that his ex is plotting to take away his son forever. Butch's only real tool to get by, he discovers, is his sense of humor.