Dr. Kendall Price was born and raised in Columbia, Maryland, the third of four children. He attended high school at the Phillips Academy Boarding School in Andover, MA, a place that left him with many fond memories, and that he calls the most formative time of his life. The friendships in 221 BC are loosely based on his time at Andover.

Following in the footsteps of his father and two grandfathers, all doctors, Kendall attended Amherst College in Amherst, MA and the University of Illinois College of Medicine and studied pathology at Stanford University. While there, he did four fellowships, including medical staff/ autopsy, hematopathology, surgical pathology, and immunohistochemistry.

Doctor Price lives in St. Paul, Minnesota with his wife Michelle and their three children. It was Michelle’s influence, with her study of Chinese medicine, and a masters degree in Chinese acupuncture, that led Dr. Price to become certified in acupuncture himself. The magic in 221 BC is based on Chinese medicine.

In addition to writing and Chinese medicine, Dr. Price enjoys working out, reading fiction, and travel. He has been to all 48 continental US states, Canada, Mexico, Alaska, and Copenhagen.

Other writing credits include a small booklet, available on Amazon, on healing dental caries by nutritional means.

Laura Vosika has been featured on TV, radio, and in print for her artistic and business endeavors. She is best known as the author of the acclaimed Blue Bells Chronicles, the story of a modern day, self-indulgent, famous--and infamous!--classical musician and a noble, medieval Highland warrior as they crisscross medieval Scotland and the 21st century.

Laura credits her love of history and adventure to her childhood experiences of visiting castles and medieval towns in Europe, seeing the Alps and bullfights, and visiting historic sites on America’s East Coast.

Laura holds a bachelor’s degree in music and a master’s degree in education. She has played freelance on trombone, flute and harp, directed a school band, and, for nearly three decades taught private lessons on piano, harp, and wind instruments. She is a faculty member at Kramer’s School of Music and Music for Everyone.

In addition to writing and music, Laura runs Gabriel’s Horn Press and is part of the photographers’ collaborative, Emmanuel’s Light, which displays its work around the Twin Cities. Laura lives in Minneapolis, and is the mother of 9.

“Price paints a vivid, intricate portrait of war, juggling a wide array of famous characters, including the notorious Hannibal, and using meticulous research to flesh out this universe, rooted in historical facts and details. The prose is rich and involving, and the twists are carefully designed and executed. An inventive blend of Egyptian history and magic, this dynastic tale opens what promises to be a stellar series.”
– Kirkus Reviews 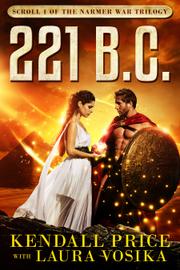 Set against the backdrop of the Ptolemaic Kingdom in an alternate history linking the power of the pharaohs to magic, this first installment of a trilogy details the beginnings of a war pitting brother against brother.

As the debut novel opens, King Ptolemy IV, Macedonian ruler of Egypt, is distraught over the apparent murder of his friend and mentor, Qibo (“Multiple gashes covered his body. His eyes stared at the ceiling, as if he could still see whatever had killed him”). The ancient Taoist master had worked at the Museum of Alexandria for years. This act seems to be the dark culmination to a number of days in which Ptolemy has been plagued with nightmares laced with what appear to be strange signs. He dreams he is the Pharaoh Amenhotep, worrying over his kingdom and suffering from dental pain, the latter of which seems to affect Ptolemy’s waking hours as well. After exhuming the dead pharaoh’s body, experts discover that he did indeed have advanced abscesses in his teeth, which leads head librarian Eratosthenes to posit that someone might be working magic against the king, perhaps to re-create history. The theory is that Qibo was murdered to prevent him from translating ancient tablets that might help Ptolemy unlock the magical powers of a set of 12 amulets that have been in the possession of the pharaohs for untold years, each associated with a different element. Using the artifacts, someone might be able to wrest control of the kingdom. As the story proceeds, Price paints a vivid, intricate portrait of war, juggling a wide array of famous characters, including the notorious Hannibal, and using meticulous research to flesh out this universe, rooted in historical facts and details. The prose is rich and involving, and the twists are carefully designed and executed. The only quibble is that the characters aren’t particularly complex, with the plot machinations remaining more important than psychology. Ultimately, this is a small complaint that doesn’t detract from the book’s impressive accomplishments.

An inventive blend of Egyptian history and magic, this dynastic tale opens what promises to be a stellar series.