Before retiring in 2009, the author worked as a Case Manager at the Veterans Administration Medical Center in West Los Angeles. In his early years he tried his hand at, and gained experience in a variety of different jobs. But his first love, since the age of 14, has been literature. He read the works of Michener, Poe, Conrad, Melville, London and others, and harbored their tales of adventure and psychological suspense in his heart, until he was able to strike out on his own and garner, in a handful of years, enough experience and first-hand knowledge of unique, unusual characters to last him a lifetime.

“A rich, exotic journey that will leave you reaching for your passport.”
– Kirkus Reviews 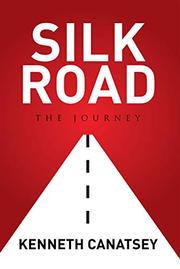 In a bohemian odyssey set in the 1960s, a young man just out of college backpacks around the world, sampling hash, sex, acid, and illumination as the Vietnam War rages.

In 1966, fresh out of UC Santa Barbara, Ken and roommate Jeb set out to hitchhike to New York City. In New Mexico, Jeb lucks out and catches a solo ride, while Ken climbs in with Lester, a spooky ex-con. Lester gleefully tells of a 13-year-old girl who “cummed in her panties” at a Beatles concert, and he warns Ken to look out for Texas Rangers. Ken lands in the East Village and is soon living with Brenda, a secretary at Columbia University. They marry and set off to backpack the world. Debarking in Ibiza, Ken memorably sees his landlords’ pet monkey carbonize himself as he grabs an electric line. After some hash in Tangiers, the couple reach Italy, where Brenda is groped—a recurring problem—this time in Naples. The travelogue moves on: Byron’s name chiseled by the poet into a marble column in Greece; Masada in the early morning; a Sikh worship service in Tehran; into Afghanistan and hash in Herat. As the narrative turns to New Delhi, its primary strength and challenge become clear: this is an exceedingly rich buffet. But patience is rewarded, as Canatsey (Confessions of a Friendly Anarchist, 2012, etc.) excels at the mesmerizing detail: the monkey’s “palms melted into the wires as electricity coursed through his body, and his body gradually diminished in size as the volts steadily burned away his flesh, muscles, sinews, organs and fat—the greater part of his entire physical mass.” At 400-plus pages, the novel could sometimes benefit from the spicy ironies of a Paul Theroux or the careening freedom of a Kerouac. But overall, Canatsey’s grasp is equal to his reach, and many passages will leave armchair Marco Polos hungering for more.

A rich, exotic journey that will leave you reaching for your passport.

SILK ROAD: THE JOURNEY IS A COLORFUL, UNAFRAID, MATURE COMING-OF-AGE STORY WITH A VINTIGE VIB AND EVERY-GENERATION INTROSPECTION, 2015

A BILINGUAL EDITION OF POEMS BY ST. JOHN OF THE CROSS: SPIRITUAL SONGS AND BALLADS

This title has facing page translations of the great 16th-century Spanish mystic St John of the Cross. The preface and introduction contain biographical material and contextual information. The volume also includes poems attributed to St John of the Cross, but questioned by many critics, many of them translated here into English for the first time.
ISBN: 0-7734-6574-X

BLESSED BE THE ANAWIM

These poems are, for the most part, meditations on Christ, on the oneness of his human and heavenly natures, and his compassion for those most marginalized by society. Although utilizing contemporary verse forms, the poems hearken back, in theme and sensibility, to the Metaphysical Poets.

CONFESSIONS OF A FRIENDLY ANARCHIST

There is a little bit of the anarchist in every youthful heart, whether it be expressed as a hatred of dullness, a spirit of adventure, or a passion for ideals. Just be wary of the pitfalls.
ISBN: 978-1-61897-253-8

The Daimon Call: a travel journey in verse and other poems

Poems reflecting on the outward journey and encounter of distant places, mirrored by an inward search for personal meaning which is happening in the course of experience. Most of these poems of place were written during periods of travel in Morocco, Greece, Israel, Turkey, Afghanistan, India and Nepal. The author taught English as a second language in Katmandu and in Athens before returning to California. He currently works as a Registered Nurse for the VA Health Services.
ISBN: 0-7734-3126-8