Ketevan Alexander was inspired to write Bear of Trees by her childhood in the Republic of Georgia and her father’s appreciation for the natural world. In Ketevan’s home, dogs were treated as family members—and the same is true today of her own dogs, Angus and Willow.
Ketevan has worked as a computer system engineer, a teacher, and a women’s rights advocate, but she is perhaps most passionate about instilling in children a respect for all living beings. In the company of her curly and bushy-tailed family members, Ketevan is currently at work on Two Days with Io, a children’s book in the same spirit as Bear of Trees, though with an extraterrestrial bent!

“funny, dramatic, and sweet story that ought to become a classic.”
– Kirkus Reviews 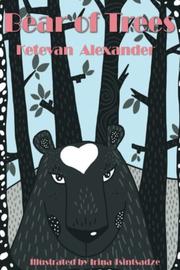 In this debut illustrated children’s book, a young black bear makes a dangerous journey to help the brown bear that she loves.

Bear of Trees—called “Betrees” for short—grows up in the Eastern Woods. Most of her fur is dark, like her mother’s, but she also has a white, heart-shaped spot on her forehead because her father was a polar bear. When she turns 2 years old, Betrees finds her own den and settles in for a winter’s sleep, waking up thin, hungry, and in search of food and someone to love. Gojoon, a bossy male bear, tries to make Betrees his bride, but she resists and is defended by Ben, a brave, kind brown bear. For Betrees and Ben, it’s love at first sight, and they agree to meet again in about two months. Ben doesn’t return, though, so Betrees visits the owl oracle, who tells her that her loved one is in trouble and that she must cross the dangerous Metallic River—a road full of cars—to save him. After overcoming many dangers, she and Ben reunite and save two humans whose car crashed. One, a little girl, later tells her story to National Geographic: “Please don’t shoot bears,” she says. “They are not all as dangerous as they seem.” The book ends with Betrees and Ben on their honeymoon. Alexander tells a charming, delightful story. Betrees is both lovable and admirable, helping other animals and exhibiting considerable courage in rescuing Ben, who shares her qualities. They’re each other’s heroes, which greatly bolsters the story’s love-at-first-sight element. The narrative also thoughtfully considers the role of humans: some are dangerous, but others are helpful, as Ben recalls in a childhood memory. High praise goes to the beautiful illustrations by Tsintsadze (Wie bekamen Igel Stacheln, 2015, etc.), rendered in soft, forest-y shades of blue, gray-green, and brown. The pictures of fat bears and other animals are expressive and engaging, featuring wonderful details, such as Betrees’ tail poking out of her polka-dot nightgown, and their lovely Gustav Klimt–like swirls and other textures lend a fanciful air.

A funny, dramatic, and sweet story that ought to become a classic.