Kofi Ayim was born in Ghana, West Africa to Akan parents. He is described by both admirers and critics as a traditionalist with insightful knowledge of the culture, tradition and custom of his people, the Akan of Ghana.

He has always been fascinated about the history, culture, and social aspects of ancient Akan people. Trained as engineer with advance degrees in Telecommunications and Transportation, Kofi became interested in reading at very early age. He basically became a self-made journalist writing for Asenta, a one-time African community newspaper in New York City. He is currently the editor of Amandla, a major African community newspaper in the New York area. He has two books to his credit.

“As a member of the 1st Battalion, 1st Company of the Revolutionary Army, Cudjo clashed with British forces at Yorktown, Valley Forge, and alongside 800 other black soldiers at Monmouth, the largest battle of the war.”
– Kirkus Reviews 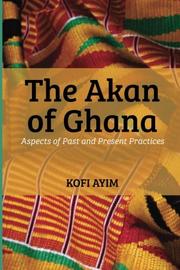 THE AKAN OF GHANA

Ayim (Jack Cudjo, 2011) explores the history and culture of the West African Akan people in this nonfiction work.

Some Akan people live in Ivory Coast, but most are based in southern Ghana. There, they constitute a majority of the population, and their primary tongue, Twi, is its most commonly spoken indigenous language. “The word Akan literally means ‘premier,’ ” the author notes. “Akanfo means ‘premier people,’ connoting a group of people who consider themselves among the earliest of nations.” Tradition holds that the Akan’s origins are connected with Pharaonic Egypt, and Ayim offers a comparative analysis of these two cultures as well as of other African peoples in different periods. The author explores the particulars of traditional Akan society, from its foundation myths and history of migration to its distinctive matriarchal structure. The book pays much attention to social organization and rituals, and it clarifies the Akan understanding of the individual, death, and other sociological concepts. Numerous appendices explore further details, including symbology, woven kente cloth, and common names and proverbs. Ghana, like the rest of world, is constantly experiencing cross-cultural pollination; the author describes this as diluting Akan culture, and he argues for the necessity of traditional ways: “The average Ghanaian has been made to understand that drumming and dancing are all that culture is about,” he says. “But a well-developed and harnessed culture…could contribute its quota to national development.” Ayim writes in a prose style that’s formal yet accessible and detail-oriented. The overall tone is scholarly, and the book’s brevity and diversity of content make it a serviceable introduction to Akan culture. Its analysis of cultural and linguistic links between the Akan and ancient Egyptians is intriguing even if that connection finally remains murky. The text can be a bit dry at times, but it adequately captures the rich history of its titular people, and it will likely inspire some readers to seek out more information about Akan culture. Readers interested in the history and peoples of West Africa in general, and of Ghana in particular, will find much of interest here.

A thorough and illuminating cultural primer. 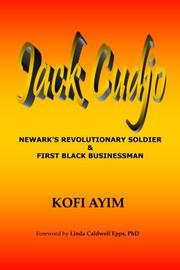 A black soldier fights in the War of Independence and later finds fortune in Newark.

In his nonfiction debut, Ayim surveys the life and times of “Jack” Cudjo Banquante, a Revolutionary warrior for a cause to which he owed little and a horticultural importer in Newark after the conflict ended. Born the child of slaves around 1723 and probably sold by Dutch traders, Cudjo was purchased by Benjamin Coe of Newark and sent into combat in the owner’s stead. As a member of the 1st Battalion, 1st Company of the Revolutionary Army, Cudjo clashed with British forces at Yorktown, Valley Forge, and alongside 800 other black soldiers at Monmouth, the largest battle of the war. Despite the fact that Cudjo’s “military record is as obscure as the records of many slaves who sacrificed limbs and souls during the Revolutionary War,” Ayim proceeds to weigh all the period documentation about the hero: his service, his later career as a cultivator and merchant of exotic plants, and his marriage and progeny. Thrust into the worldwide nightmare of chattel slavery, Cudjo fought bravely in a war he didn’t choose and later became so admirable around town that “even children born in slavery were named after him.” More than an account of one man’s struggles, Ayim’s book is an engrossing primer on the Akan people of West Africa—the horrors they either died from or endured in the trans-Atlantic slave trade—and a meditation on this brutal institution in the Northeast, a region that likes to fancy itself untainted by such barbarity. Of Akan heritage himself, the author proves himself a worthy guide and admirable documentarian on the later dispersion of Cudjo’s family as well as the ensuing history of Northeastern slavery. Although “the state of New Jersey officially abolished further importation of slavery in 1786,” Ayim tells readers, “yet 74 years later (1860) eighteen slaves were recorded in the census.” Subsequent researchers will likely be obliged to the author for the hours he spent fishing pearls from the archives, and readers with an interest in American history of all kinds will encounter a story they should know.

A comprehensively researched and absorbing study of a freed slave’s life.