Kevin Kmitta was born in La Salle, Illinois, the middle child of five. Despite his unending love for his two older and two younger sisters, sports participation and adventure provided the "great escape" during those inevitable times of sibling oppression--both real and imagined.

White-water canoeing, backpacking in remote wilderness and river-rafting more than once presented do-or-die situations. These adventures, amongst others, were of the type that could change one's perspective on life.

In the smorgasbord-table of life, his degree in journalism from Northern Illinois Universtiy in DeKalb provided the basic ingredients of meat and potatoes, and the aforementioned experiences--blended with a heaping dose of world travel--helped provide the spicy extras into what has developed into a unique approach to putting historic fiction down on paper.

Kmitta resides in Belleville, Illinois, with his wife Jayne and a cool black cat named Brando. He is currently at work on his next work of historic-fiction, a novel about the Trail of Tears called Sugar Creek. He and his wife have three grown children- Kristopher, and twin daughters, Jessica and Kayla.

“. . . a capable writer, never skimping on detail and keeping the story moving at a fairly brisk pace while also giving readers a present-day protagonist that they’ll sympathize with and root for.”
– Kirkus Reviews 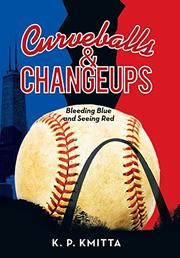 The story starts in 1867 with a mysterious, forceful figure named William Hulbert who’s committed to two things: Chicago and “base ball”—two words, as it was then spelled. He’s determined to get this new game taken seriously as a professional sport. (In real life, Hulbert went on to found the National League in 1876.) Meanwhile, readers are treated to cameos by historical figures such as beer magnate Adolphus Busch and future president Ulysses S. Grant. The narrative then shifts to 1967—and from third-person narration to first-person—to focus on a young fan named Scott Banks at his first Chicago Cubs baseball game. Scott remains an avid Cubs fan as the years go by, even after his job forces him to move to St. Louis—enemy territory, as it were. Later, he has a wife and three grown kids, all Cardinals fans, and he wins a contest to face off as a batter against genuine Cardinals pitchers. Scott showed some promise as a high school baseball player, but life and injuries intervened; now, he can get a tiny taste of “The Show,” even if he has to do it in Busch Stadium, not Wrigley Field. The story toggles between Hulbert’s and Scott’s stories, and the run-up to Scott’s big showdown, in particular, is handled well. Part of the fun for readers will be in learning early “base ball” lore and terminology: the catcher, for example, was called the “behinder,” umpires were “arbiters,” and fans were “cranks.” Kmitta is a genuine baseball fanatic; indeed, Scott appears to be a thinly disguised version of the author, who’s active in a vintage baseball league. He’s also a capable writer, never skimping on detail and keeping the story moving at a fairly brisk pace while also giving readers a present-day protagonist that they’ll sympathize with and root for.

A good read for any baseball fan and a fitting tribute to the recently triumphant Cubs.